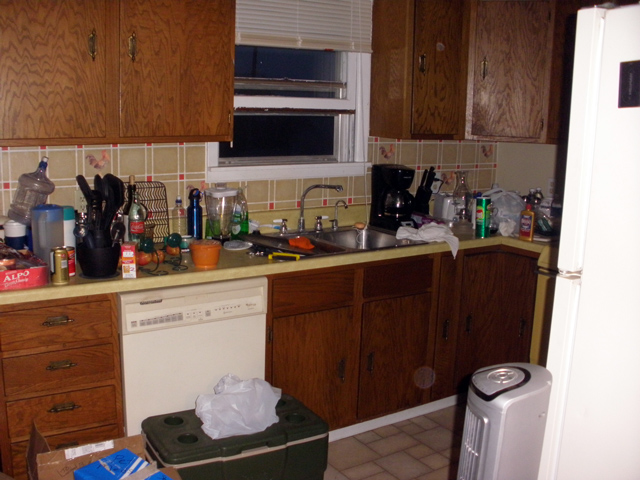 All this crap is supposed to go... somewhere.

There are seriously boxes everywhere.  It’s a mess but starting to come together.  The kitchen is looking a lot better now than last night when I took that picture. 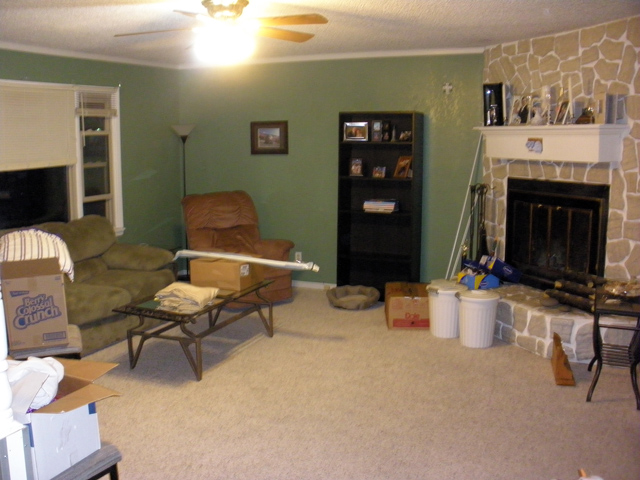 I think that's a fine place for the pet food bins.

One thing that is nice about this place is that the windows actually open and on the nice cool evenings we’ve been having you can open the windows up and just fill the house with fresh air.  I’d never seen one before, but this house has an attic fan what really moves some air and pulls some major air into the house.  The slats are kind of broken on it, but I can fix that eventually. 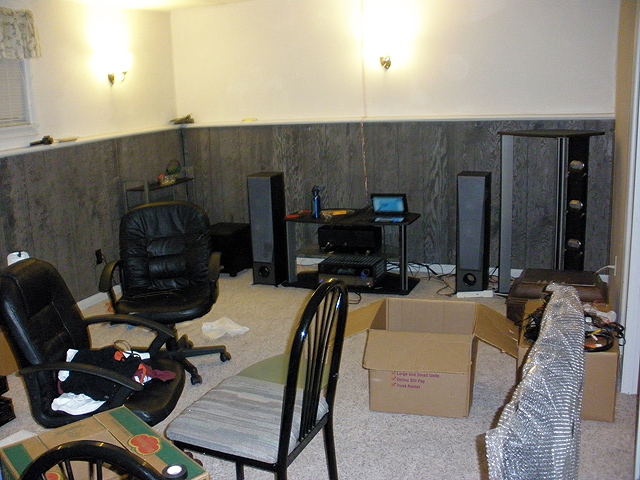 This will be the media room sooner or later.

Andrea’s made a lot of progress in the basement since this picture.  We decided that we wanted the TV to be separate from the living room upstairs, so that we have a nice place to sit and visit or just relax without the distraction of the TV (as if we get more than one channel).  So far I’m enjoying it. 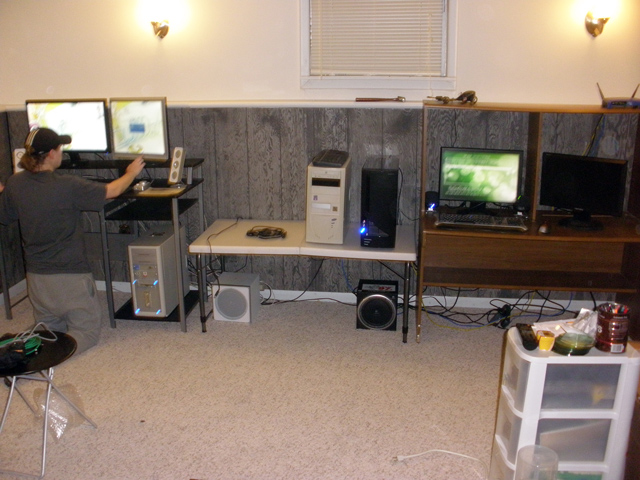 And the computer room.  Contrasting popular belief this WASN’T the first room we started on.  The good news is everything is pretty much up and running.  I haven’t had time to fire up Guild Wars yet, but the network is perfect, and I even think the Wi-Fi reaches a bit further without all the plaster walls we had in the old place.

All in all it’s slowly taking shape.  I have some major work to do in the garage.  Get some trees trimmed, get the rest of the house all put together by the weekend.  That’s my goal.  After posting these disaster pictures, I’m committed now to posting some nice clean pictures of the house when we’re done.

I couldn’t help but laugh.

We’ll be going into communications silence here soon.  Internet is getting disconnected here in Great Bend sometime tomorrow.  Of course internet in Albert is already up and running, but I won’t be over there until Saturday.  Andrea is off tomorrow, so maybe she can at least go over there and take a few boxes and log the server back onto the DSL.

I’ll still have the phone, but it means no Guild Wars or Minecraft.  Ack!  That’s fine though.  Plenty else to do yet to get moved.

See ya on the flip side! 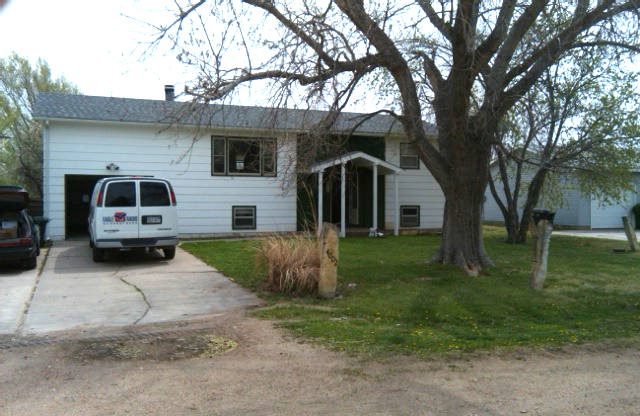 Need to trim some trees. 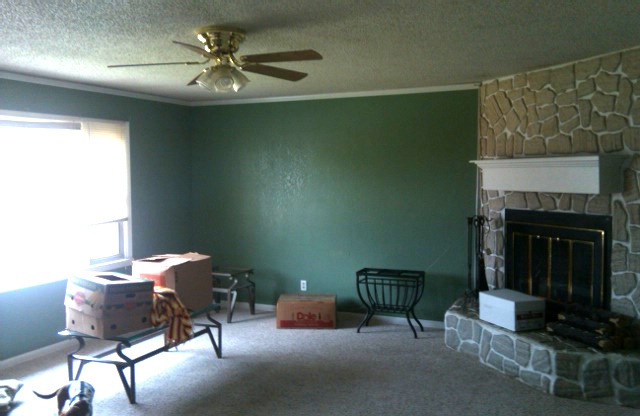 Hey der, ho der.  We’re on the move.  Borrowed the van from work and loaded it to the gills.  Made two trips today, which really took care of about 90% of our crap if you exclude what we need for day to day living.  It’s looking pretty hollow in the current place.

If you’re worried, I’ve made sure Andrea is on light lifting duty.  But she’s still been more than helpful.  Like when I lifted up our first big box and the bottom busted out from under it.  DVD and Game boxes went everywhere!  She fix the box and got it re-packed while I was able to keep hauling out.

The new pace was pretty big when we looked at it, but now that we are starting to get our stuff in it, it’s really seeming big.  It’s gonna be nice, but it’s going to take a while to figure out what to do with all the space.  Amongst the most awesome features.  A garage opener (only one car garage though), a work shop in the garage, a fireplace in the living room, a nice big den in the basement, and plenty of storage.  It’s not perfect though.  It’s got some blemishes and some of the paint was sloppily done, but we don’t need anything that’s perfect.

Right now Andrea’s plan is to make the upstairs living room TV-less.  I’m all for this!  A nice fire in the fireplace and no TV to distract you.  And all the media stuff is going in the basement.  TV, computers all that going in the den/computer room.  The problem I think we’re going to run into is not enough furniture to sit in!

So the move is going smoothly so far.  All the big stuff like the appliances and desks and such aren’t getting moved until Sunday as we won’t have a truck until then.  But so far it’s good knowing it’s finally happening!  Can’t wait to have ya’ll  over and fire up the grill!

The joys of moving

For those that don’t know, we’re moving out of Great Bend.  Not too far though!  Just about 10 miles down the road to the little town of Albert.  So no new jobs or anything like that.  Just trying to get to a little better neighborhood, and this new place should work out until we’re ready to buy a house somewhere.

The house in Albert is still an older house, but it’s definitely much larger.  Larger than we really need, but our increase in rent will only be about $75 a month.  Thankfully I’ve picked up some extra voice track duties at work that come with a little extra pay that should help offset the increase in rent and gas money.  The old house used to be a FIVE bedroom, but the two bed rooms upstairs have been combined into one.  It has a nice little fireplace in the living room and a den and a few more bedrooms in the finished basement.  Only has a one car garage, but the driveway is wide enough for two cars, so I can leave the Toronado out in the driveway while Andrea parks the Cutlass in the garage and we can both still get out.  Heck even if a storm rolls through I’ve already got hail dents on the Toro.

Really looking forward to getting out of this place.  It’s like that feeling you get right before you’re about to go on vacation and the last day of work just drags on and on.  This hasn’t been a bad place here on 10th Street for the most part.  I mean until recently no one has bothered us and we’ve had everything we needed.  Infact I’m really going to miss being able to walk to work.  But ever since these new neighbors moved in behind us it’s just been uncomfortable.  I can’t walk from my back door to the car without the neighbor sticking his head outside the door and hollering at us about something.  Whether it’s to look at his “new rims”, apologize for riding his ATV through my yard, or yesterday he wanted to buy my broken dog leash.  That’s of course when the cops aren’t over there which happens about every 3 – 4 weeks.

So hopefully we can rope as FEW people as possible into the move.  I’ve got permission to use the van from work and a friend of Andrea’s has a box truck we can use.  So all signs point to a smooth move.  I’ll have plenty of pics once we’re settled in the new place.  It’s gonna look pretty empty though, because we sure don’t have enough junk to fill up the place!

Much to talk about…

The poor blog.  Fallen almost into a state of neglect as of late.  It’s just been busy.  Well… busy and with what free time I have I’ve been playing Guild Wars or N64.  Next few weeks should continue to be busy, but there’s a lot of things that could use a little more detail and should probably be dished out on the blog before I forget them forever.

We’re getting ready to move in about two weeks!  Finally leaving our weed selling, hillbilly neighbors behind!  The ones that have the cops visiting once a month and ride their ATVs through my yard.  Man, I’ll miss those guys.

Work is going at a furious pace, but going well.  Seems like I’m taking on more and more everyday.  Just often enough though, I have a day where I’m super productive and I am able to knock a ton of things out without interruption.

Little Luke is doing great as far as we can tell.  Andrea says he’s a kicking little guy, but I still can’t feel him very often.  We’ve got another appointment next week for some more baby checkups.

Off to work now, more blogs to come.