A Look Back: Hydro Thunder 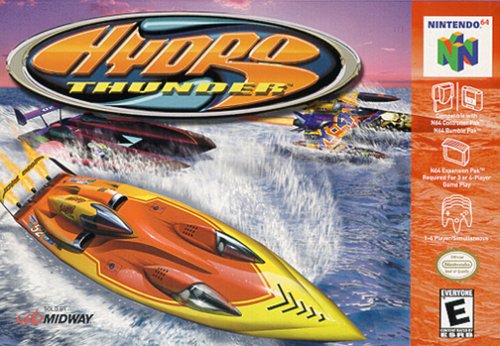 This re-review will be pretty brief.  In large part due to the fact that Hydro Thunder is about as straight forward as games can get.

If I recall correctly, Hydro Thunder was a birthday or Christmas present in what would have had to have been the year 2000.  I was familiar with the game from its arcade presence (which was basically every arcade in America) but it was not a game that I was particularly interested in adding to my N64 collection.  After an obsession with Crusin’ World in the arcade, and then feeling underwhelmed when I finally got my own cartridge, getting Hydro Thunder never even crossed my mind.  Luckily someone took care of that for me!

Things move pretty fast in the technology world.  The N64 came out in 1996 and this game was released a little less than 4 years later.  While the hardware packed in an N64 will never change, arcade cabinets were getting more powerful all the time.  I want to say that the arcade version was running on a souped up version of the brand new Sega Dreamcast hardware.  Even though I’m not a huge fan of this game, I do have to admit that the arcade version of this game has some pretty good eyecandy, even by today’s standards, and 10 years ago it was pretty fun to look at.  Dialing all that down so that the N64 could handle it means there’s going to be quite a few sacrifices. 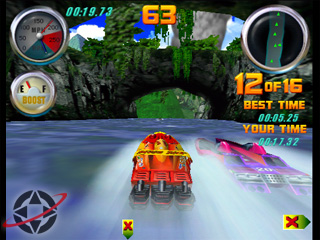 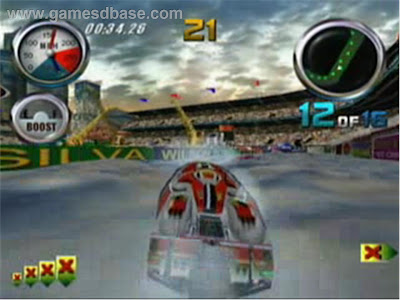 Biggest sacrifice was the framerate department.  At times this game felt really choppy.  Although this was par for the course with a lot of N64 games.  Honestly cramming this game onto the N64 complete with high quality voice over audio was pretty damn impressive.

I think my biggest beef with this game is just that by this point I really wasn’t as interested in arcade racers as much anymore.  This (for me) was just another Midway “Crusi’n” game on water.  The levels were pretty cool, the boats were cool.  But I’d played it all before.  Don’t get me wrong!  I still played quite a bit of this game.  I couldn’t just set it in the box and never mess with it.  I made it a point to beat all the levels, and unlock all the boats.  Certainly didn’t set any records though.

I pulled it out today just for this review.  And consistent with most of these games that pushed the graphical envelope on the N64, this one again hasn’t aged well.  The world is very detailed, but the low resolution just leaves it all feeling jagged and blurry.  Honestly, the framerate wasn’t as bad as I remember.  And the courses are pretty well laid out.  I found myself missing a lot of the boosts, but memorizing the few tracks there are would take care of that.  If I wished to dedicate that much time to the game.

All in all, this was a good game for what I used it for back in the day.  Then I had so much time to play.  I mean a lot of time.  And this was a great game to play and work on a little bit when I was sick of playing everything else.  Today with less time and more to play, it’s hard to find a spot for this game.