← A Look Back: Perfect Dark
Through the years →

We took Andrea’s car in to get an alignment, and they said they couldn’t align it because one of the ball joints were bad.  Ball joints aren’t too expensive ($25 each), so I told ’em I’d fix them myself and bring it back.  Instead of just doing one, I figure you might as well do ’em all.  After all, all four are 24 years old and if one is wore out, you can bet the others are close.

Basically the ball joints are the two points your front wheel pivots on when it turns, but also pivots when the wheel goes up and down over a bump.  It’s a lot like your hip or shoulder with a ball and socket design.  The job isn’t too hard to do, but it does require some special tools.

So with all the tools at my disposal I set off to get the job done.  I started out by using the pickle fork to pop the ball joint apart from the steering knuckle (the part where the wheel is). 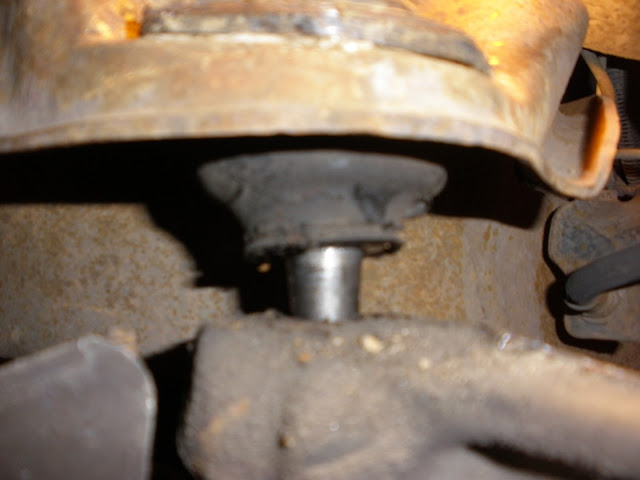 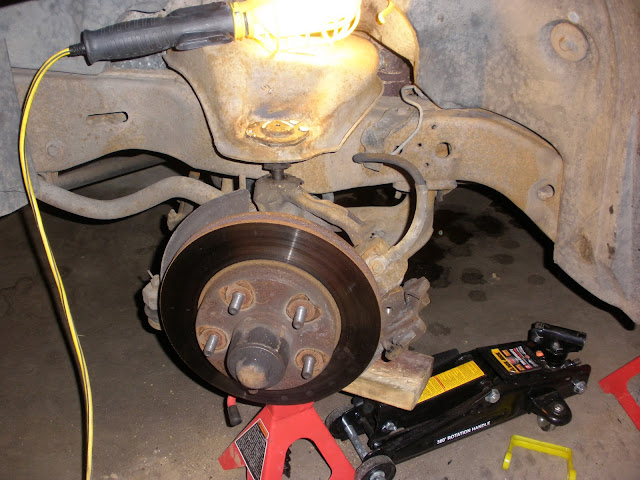 The top ball joint is a PITA because it’s riveted in from the factory.  The only way to get them out is to grind the heads off the rivets then drive them out with a BFH (big f’n hammer).  My grinder is a piddly little one (again… easier with the right tools) but it gets the job done. 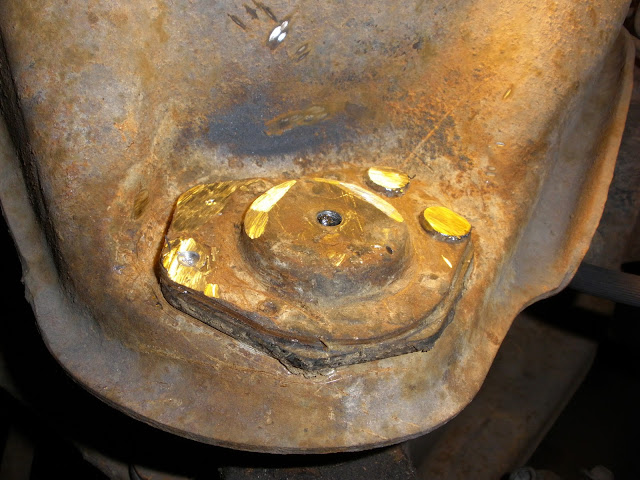 The top ones didn’t look too bad, but you can tell they were fairly worn.  Moving around the stud by hand was pretty easy on the old ball joints, but the new ball joints feel very stiff.  This is actually good because it will give a more firm feeling on the road compared to that “floaty” feeling people often associate with old cars.  Fact is yeah, these cars are a little less firm riding than new cars, but people forget how these cars drove when they were brand new.  Take a drive in the Toronado that I just rebuild the suspension on last year and it drives real nice!  The Cutlass will be right there next! 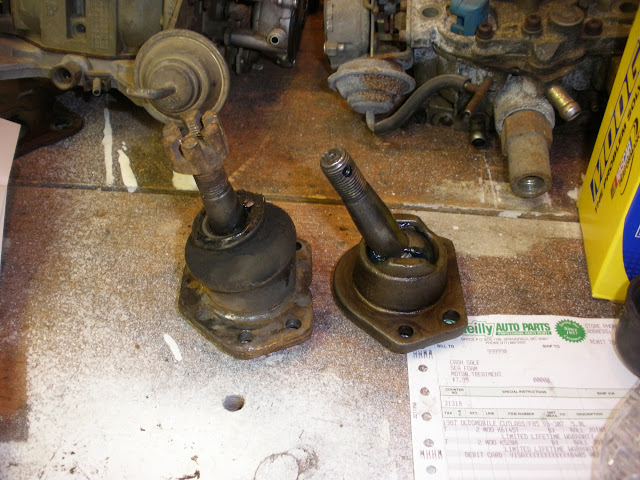 So with the top ball joint out it’s on to the bottom.  These do the same job but are installed completely different.  They are “pressed” in.  Meaning there’s no bolts or rivets holding them in, rather they are slightly tapered and pressed into an opening so tightly that no normal force will unseat them.  So naturally it would take an ABnormal force to remove them.  That’s why I got this big ass tool from AutoZone.  Lukily they loan it out for a (hefty) deposit, but refund it 100% when you bring it back.  It was $100 bucks to take this baby home, but it’s worth it considering 1) I’ll get it back when I’m done and 2) a shop would have charged more than $100 in labor to do this job. 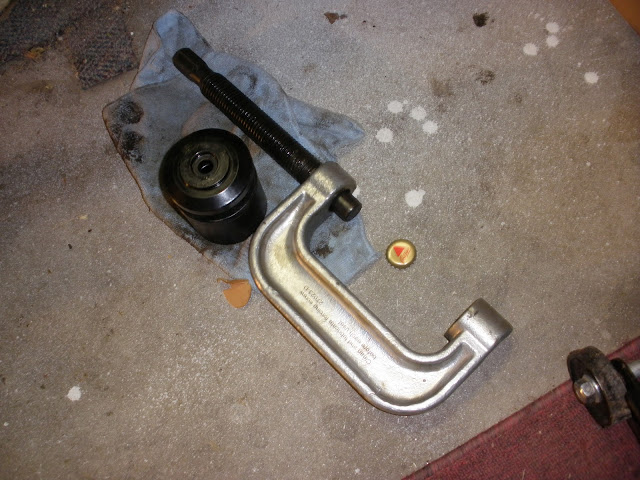 So using that tool you can press down on the lower ball joints and it just shoves ’em right out.  That tool will literally exert tons of force on the ball joint.  It’s like a can crusher from hell.  Here’s a video of it in action.  With a little might it comes out without much complication.  Leaving a nice clean hole for the new lower ball joint. 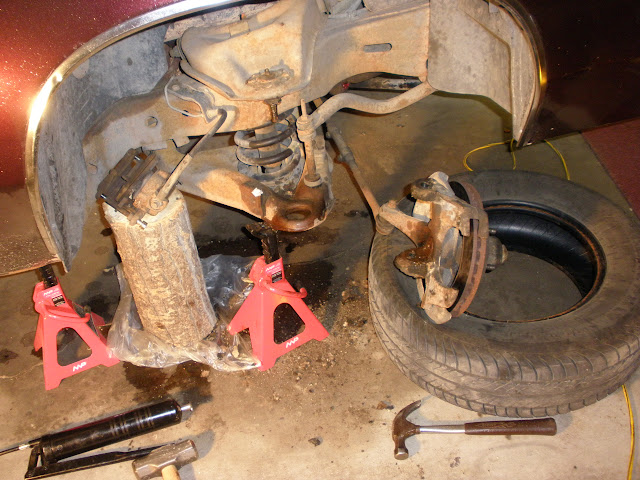 The lower ball joints were quite worn compared to the new ones.  Much more so than the top ones. 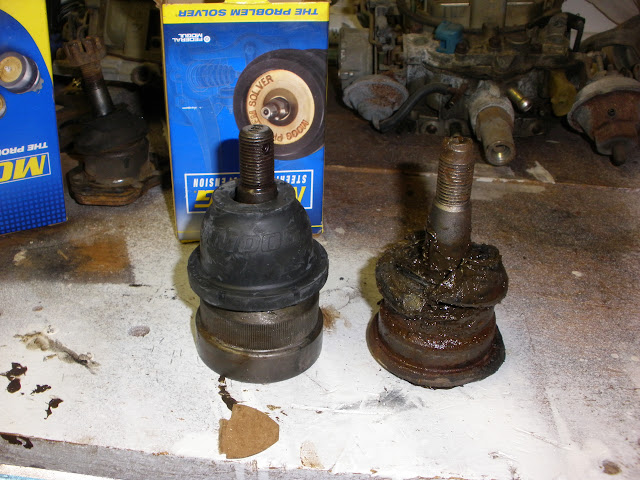 Re-assembly is always the fun part.  Pressing in the new lower ball joint is the hardest part.  Takes just as much might as removing it, naturally.  But once installed looks so nice! 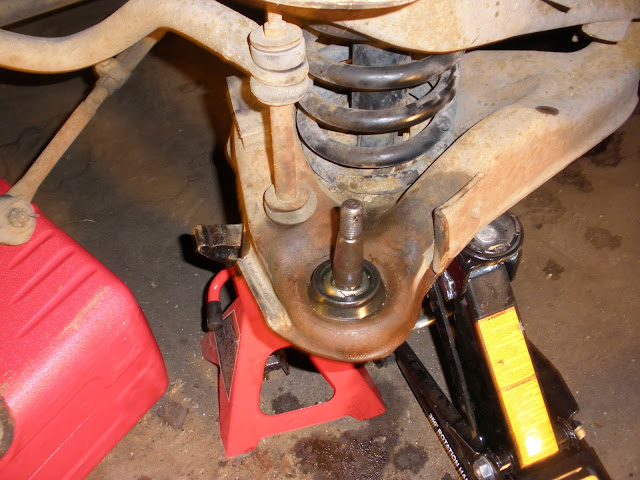 Then the protective rubber boot will keep dirt and grime out and prolong the life of the ball joint. 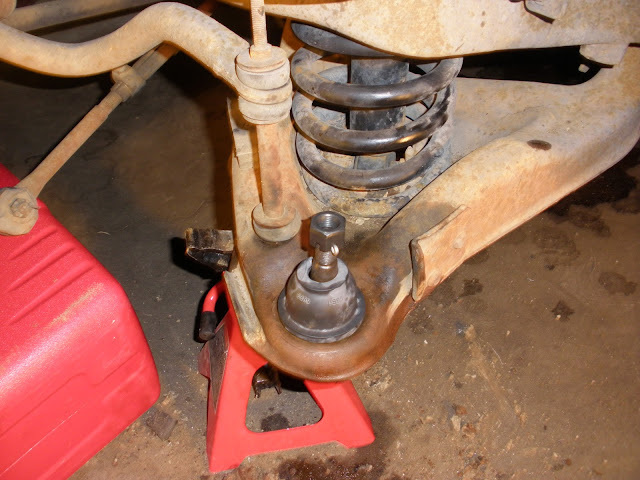 And then all back together and solid as a rock.  The car should drive a whole lot better now.  Just need to put the wheel back on and ready to go to the alignment shop! 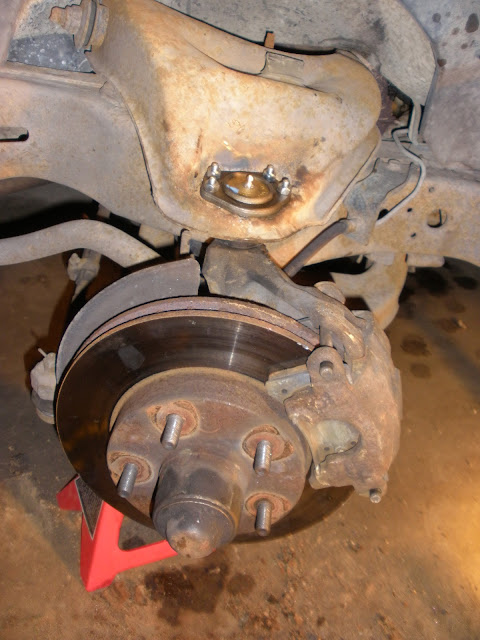 ← A Look Back: Perfect Dark
Through the years →