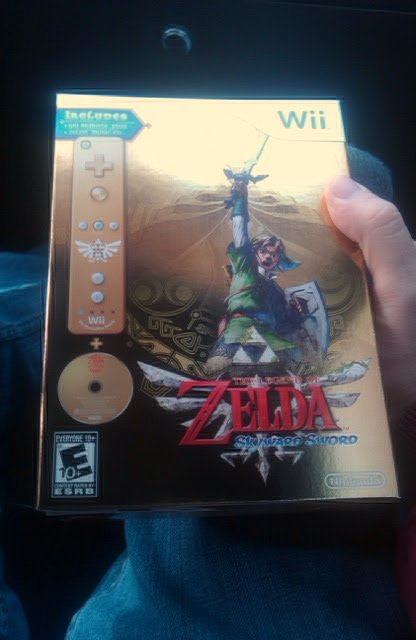 I haven’t anticipated a game like this for quite some time.  In fact the last game I recall going to the store to get on launch day was The Legend of Zelda: Wind Waker.  That was 7 years ago.

Andrea had actually planned on getting me this for Christmas, and truth be told, I’m fine with this STILL being my only Christmas present.  I had been following the hype online and by most all accounts this is far and away the best game on Wii, and one of the best Zelda games of all time.  Now maybe that’s just one of those things they say to help boost sales and such… but either way, I was stoked to get it.

So we headed into the store this morning.  It was cold, about 25 degrees.  Gamestop opened at 11AM, but unlike the olden days I wasn’t there as they unlocked the doors.  Something about having Luke around and things just take a little longer.  So we had a few errands to run, and made Gamestop our last stop.

The preorder was under Andrea’s name, so I offered to stay in the car with Luke, while she went and picked up the game.  This is the part where it gets really geeky, so watch out.  I kinda wanted to go in there, just for the whole experience, you know.  To see them reach into those boxes that probably haven’t even been stocked yet, because, why bother putting them on the shelf? They’re pre-orders bound to be picked up by those who reserved them.  So the box is like some kind of cauldron that manifests this mythical game that so far has only exsisted through the stories and images you’ve read about, only to be willed into solid reality by months of patient waiting and $70.  That moment when the game finally becomes real.

For some reason… and probably all the wrong ones, I decided I didn’t want to be “that” guy.  So I volunteered to stay with Luke in the car.  Right before Andrea came out, another person, probably my age or a little younger came out with the game in hand.  He got in his car, but as I expected him to leave, he didn’t.  I couldn’t see what he was doing, but I knew.  He was opening the game and pouring over the contents of the limited edition box.  I actually found myself envious, and a bit regretful that I didn’t go in and get it myself.

But moments later, the woman I loved emerged with a big smile on her face holding our copy of the game.  It’s reasons like this I love her so much.  She hopped in the car, and handed me the game… finally there it was, in my hands.

As we drove home I turned the larger than usual game box in my hands.  Gleaning over the box art… game synopsis and multitudes of warnings in multitudes of languages.  The box had a very satisfying weight to it, as it contained not only a copy of the game, but a special 25th Anniversary Symphony CD, and a special gold Wiimote.

Of course I wanted to tear into the box right then and there… but I wanted to wait until we got home, so I could savor it and take the time to appreciate all the brand new items inside the box.

I brought in the house, Luke in my right hand, and the game in my left hand.  I found myself pondering as I walked up the stairs, which would be more appropriate to set down to free a hand to turn the door knob.  For some reason it felt like setting Luke down and holding on to the game to reach for the door implied some kind of messed up priorities… but as I got to the door, I thought… hell, setting the carrier down is just easier, so I did and opened the door.  Haha.

I set the game on the table, and as a good responsible father would do I tended to my son who was ready to get out of the car seat and kick it like babies  do.  Before I know it Andrea has the game and is peeling the sticker seal off the game.  PEELING IT!  (I know, who would do that?)  One of the things I regret is throwing away a bunch of old N64 boxes that I had held onto for a long time.  I’d had them long enough that I really thought… am I ever really going to want these things.  At the time, it seemed fine, but now.. I  kinda wish I had them back.  So keeping the boxes in good shape is something kinda important now.  Not in the grand scheme of things important… but in the way that it’s never going to be new again, so you might as well take care of it.  Because some day it will be 15 years from now, and I’ll look at that box and say… dang… that was a long time ago, but this is just how it looked the day I got it.

So one of my favorite things with getting stuff like this is pulling it all out of the box.  Kinda similar to getting the box itself at the store.  All of a sudden there it is… conjured into reality.  But Andrea was already beating me to it as I was being the good Dad taking care of Luke.  To be honest I was kinda miffed at the time.  But I dunno if she was genuinely excited about it in the same way I was (doubtful) or if she just likes opening shiny new things (more likely).  For whatever reason, she was the first to lay eyes on the beautiful controller, and the game and all its inserts and such.  Not a huge deal to NORMAL people… but this is me we’re talking about. 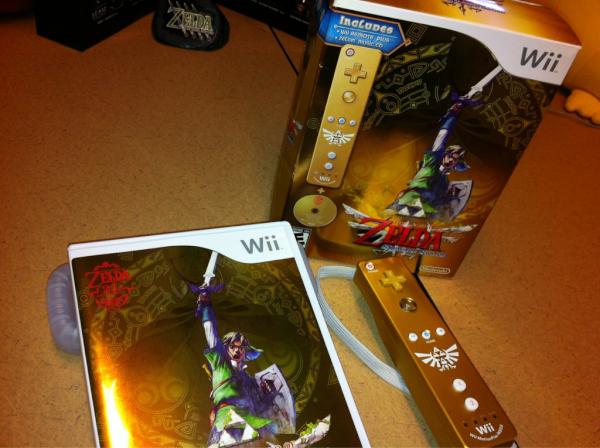 I didn’t automatically pop the game in right away though.  I for one was hungry… and didn’t want to get barely into the game only to have to stop because my stomach was growling.  So I took some time to relax and enjoy some of Andrea’s famous Mexican Dip and watch the Vikings get their butts stomped by the Raiders.  And THEN… I powered up the Wii… put New Super Mario Bros. Wii on the shelf, and put the game in.

First thing that happened was a System Update.  I’ve known they ship out system updates on the discs themselves from time to time, but more often than not by the time I get the game, I’ve already downloaded the update over the internet.  So this was the first time I’ve seen it happen from a disc.  Of course they warn you that if you’ve modified your Wii in anyway this system update could render your console useless, yada yada.  But man, compared to downloading the updates… this was fast!  Of course to my knowledge this didn’t change anything or add any new features that I could perceive.  Then again my main agenda was getting into the new Zelda game.

Starting it up the first thing I noticed was the music is FANTASTIC… already this could be my favorite video game sound track.  The second thing I noticed, unfortunately, is that the HDTV really highlights the low resolution of the Wii.  The game is still beautiful, no doubt,  but next to something like FFXIII in 1080p or even Guild Wars on the PC… Skyward Sword just seems rough around the edges.

Technical prowess aside, the game really is beautiful.  The colors and art are very painterly.  The music really is very beautiful.  But most of all the thing I like most are the characters.  They really got it right.  Moreso than any other game, right off the bat these people are interesting.  They’re not just yaking at you about how to use the controls… I mean they are… but not JUST that.  You can really feel a connection between Link and Zelda, and the characters around them  while not as impactful still feel like they’ve got they’re own personalities and their own impressions and feelings about each other.

I’m only a few hours into the game so far, but I really like what has taken place so far.  So far the direction has been pretty clear and your motivation to keep going is strong.  I haven’t gotten to any dungeons yet, but so far everything about the game has lived up to its promises!