Today was much more laid back than yesterday, and that is always a good thing.  Even when things are laid back… they could always stand to be more laid back.  Part of having a good day is making sure you get a good start.  Pancakes and bacon is a good start all right! 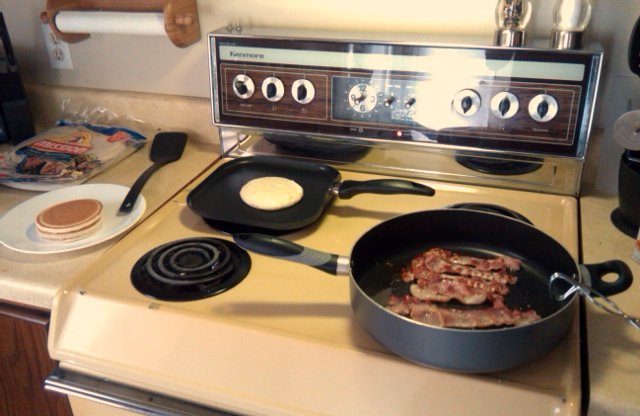 My day was mostly highlighted by playing Skyward Sword in between keeping Luke entertained.  He’s really starting to develop his personality and become inquisitive.  Andrea had a scary moment when we were in the computer room when she looked over at his blanket and he was GONE!  Only took a couple seconds to realize that he had rolled his way over to the door.  Guess he was trying to make a break for it!

The new Zelda game is pretty darn amazing.  I’m about 15 hours in now and I’m still impressed by how well the combat works.  There’s puzzles everywhere.  You almost never just go from point A to point B anywhere in the game without having to untangle some kind of brain buster.  And the story so far is fairly engaging.  This is no Final Fantasy here, but the few cutscenes there are tend to be quite powerful.  I think the part that ties it all together is the amazing soundtrack.  I really think this game has it all.  As good as Ocarina of Time?  I’ll reserve that judgement for later.