Wednesday kicked off what is going to be a long busy week and a half.  I suppose I should say late Tuesday night.  It began at about 10:30pm when my phone got a text message from a co-worker saying that a station was off the air.  Of course I was asleep early getting ready for the morning show shift at 5am the next day.  But I rarely sleep for a long period of time at night and happened to wake up about an hour after that and saw the message.  Usually its not too big a deal.  Either log-in remotely to the studio and fire the programming back up, or the transmitter is down and the engineer will take care of it.

This time though the transmitter was on, and no matter what I did, I couldn’t get the satellite to come back on.  So I had to drive into town and physically “unplug it and plug it back in”.  Which is always at the top of the trouble shooting list no matter what you’re working on!  Haha.  That did the trick.  But by the time it was all said and done it was 12:30am, and rather than drive back home.  Sleep a couple hours, get up and drive back in I just crashed on the couch in the basement.  It was some pretty crappy sleep, but better than none. 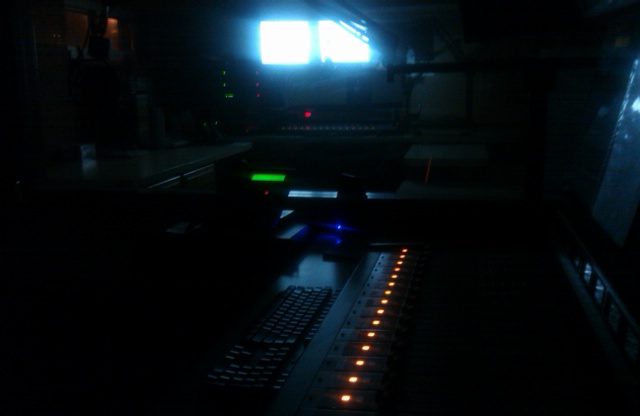 If a station goes off the air in the forest, and no one is around...

I woke up at 5am and threw on a hat and got ready prepping for the morning show.  It actually wasn’t too bad of a show.  But as soon as it was over I got the heck out of there and went home at about 8:45 am.

I kicked back and relaxed for a while, but didn’t take long for the tiredness to creep up on me.  I zonked out and slept for about 2 hours.  I should have gotten up then, but I was so comfortable that I decided… “I’ve got some more time… I’ll sleep a couple more hours before going back to work.”  That was a mistake.  I woke up rested, but somehow had an awful headache that bothered me for the rest of the day.  By the time I got off work for the second time at 7:30pm, it was to the point I almost couldn’t think straight.  So I did something I hardly ever do.  Popped a couple pills, and within an hour or so the headache was gone.  Guess my stubborn ass should have done that when I woke up…

Yesterday wasn’t too bad, though I feel like I could have gotten more accomplished.  Some of that was waiting on other people, but I surely could have had better use of my waiting around time.  So we’ll see how today goes.  It shouldn’t be too bad at all.  A lot to do, but there’s not much on my calendar that will keep me from doing it.

I’ve found that I have to keep track of everything, and I mean darn near EVERYTHING in my personal life and my work life organized on Google Calendar.  Otherwise I just plain forget stuff.  So next week’s schedule looks like a friggin mess.  But since I’ve started using Google Calendar to organize it all, it’s a lot less intimidating because I can look at that and answer just about any question from anyone as to whether I’m available to help, or what’s going on with a particular station, or who is working when. 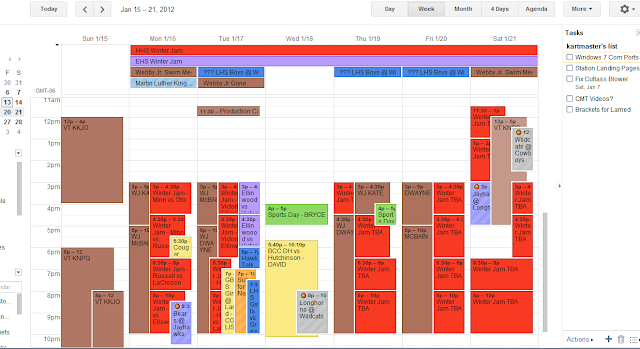 Next week is a big week for High School basketball tournaments.  And that’s what takes up alot of my calendar next week.  It usually doesn’t look that crazy, and not all of that requires my presence at work.  So I guess you could say it’s not as bad at it looks.

I’m hoping to have some free time in there somewhere.  Take some naps with Luke, play some games, and watch Andrea watch football.  She’s pretty excited that the 49ers are in the playoffs this year.  So she’s been pretty fanatical about all things football as her team continues to do well.  My team was in a fierce battle for last since the beginning of the season, so my interest in football really waned this year.  Hopefully the Vikings will make a rebound next year and I can get into it again.  I just didn’t watch much this season, because I didn’t want to sit around pissed off for three hours every Sunday.

In other news, I beat all the 150cc Cups in Mario Kart 7 last night.  Now they have the Mirror Class which I never enjoy the mirror classes.  I usually just hurry to beat them then never play again.  Online play is still fun.  I dunno if I would say it’s challenging, or just hard to win because of the way the game is.  You can’t just ride around in 1st place all race because you’ll just get pounded on.  So the best strategy is try to hang in a close 2nd or 3rd until the very end and jet your way to the front.  Of course everyone else is trying to do the same.  I’ve finished several matches in 7th place after being in 1st going around the last corner.  It’s crazy, but it’s sure as heck fun!

Progress in Zelda is more slow and steady.  It is a game that does take a good chunk of time to make any meaningful progress in, but it’s such an amazing experience so far, and one that I’m trying to savor every moment.  There’s nothing like playing through a Zelda game for the first time and having a brand new experience.  After that, every time you replay it isn’t the same.  I wish I could go back and experience so many of my games for the first time all over again.  After all, it’s that first lasting experience with a game that truly makes it memorable.  So playing through Skyward Sword feels like a privilege every time I turn it on.  And for that reason I am truly in no hurry to finish because the long it will take, the longer it will last. 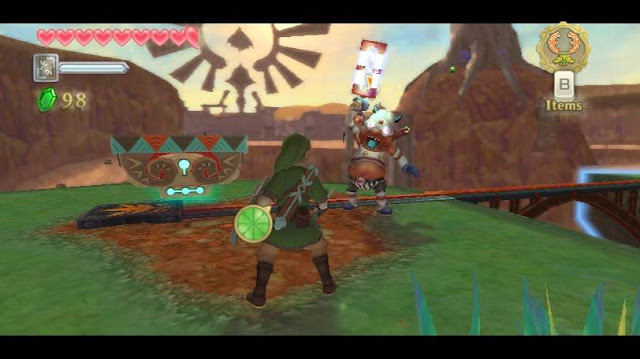 So that’s that.  I’ll try to keep blogging more through out this busy stretch.  And I’ve been trying to hit Twitter a little more too since that doesn’t take much time out of my day.  But if I go missing, know that I’m okay.