A Look Back: The World Is Not Enough 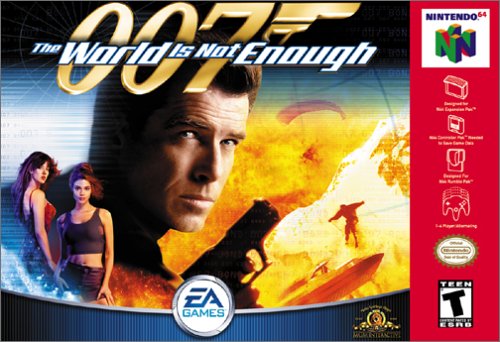 I need to set the stage a bit for this review.  This game came out in 2000 which was right in the pinnacle of my James Bond fanaticism, and also well past the point that gaming had pretty much become the de facto use of my spare time.  So while this game had everything it needed to become the most awesome game for me ever at the time, it unfortunately was not.

Here’s the back story.  When GoldenEye came out in 1997, from the moment I had beaten that final Cradle mission… I was ready for a sequel.  Rare Studios, which developed GoldenEye however, had a track record of releasing a title for the N64 about once every two years it seemed.  There was a lot of silence on the GoldenEye sequel front for a long time.  Then when the silence broke, it was announced that Electronic Arts had picked up exclusive rights to the Bond franchise.  This meant… if there was going to be a sequel to GoldenEye, it would definitely not be a James Bond game.  The game that eventually came out was Perfect Dark.  A game that really beat GoldenEye in every way… except for James Bond content.

This game still had one thing going for it though.  It was the next James Bond game on the N64.  It was still a first person shooter, and not a weird third person shooter like Mission Impossible.  And so far really had no indication that it was going to be terrible.  My anticipation of taking on the role of 007 once more meant I was willing to give EA the benefit of the doubt here.

I’ve spent a lot of time talking about the pre-release of this game, because honestly I remember that as much if not more so than actually playing the game!  After all, Perfect Dark was only 6 months old when this game released.  We were still death matching and scheduling Perfect Dark Events at that time! 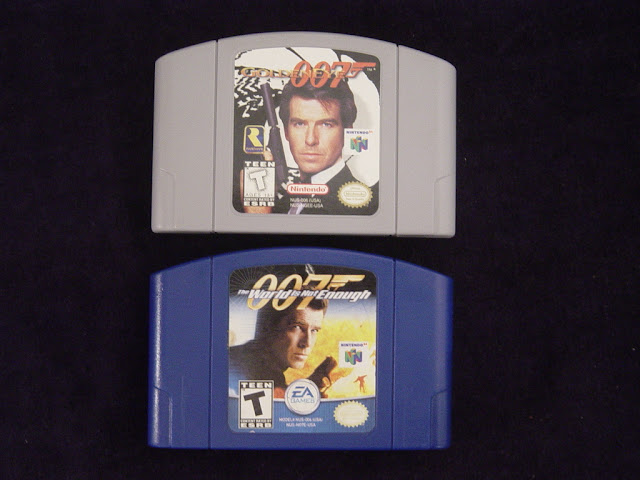 At a certian point the different colored carts were uncommon and pretty cool.  The gold carts for Zelda, or the black cart for Turok 2.  Those were pretty spiffy.  But this late in the N64’s life cycle, not only could you get the system itself in six funtastic colors, but it seemed like every new game had it’s own colored cartridge for no apparent reason.  So by this time the blue cart for TWINE was nothing new.

Okay, I feel like I’ve been pretty harsh on this game so far.  In truth that’s not really fair.  I sat down for this re-review and wanted to do two things.  One I wanted to compare this game to GoldenEye and Perfect Dark, because that is unquestionably the measuring stick I used to judge this game originally.  But also, after I looked around at some other reviews that were written at the time of release, I found that it got fairly good feedback.  So I decided I was going to sit down and judge the game completely of its own merit.

That proved more difficult than I thought.  And again after all these year brought to light the reason I just can’t get into ANY console FPS anymore.  And that is the controls.  Not that the controls are bad.  Infact playing this game, I found that it was really pretty smooth and accurate.  But here we are… 15 years later, and I hesitate to spend too much time with another game like this, for fear that I will get used to the way this game controls, and un-learn and dull my GoldenEye skills.  I mean it’s been 15 years!  Let it go!

But if you had any idea how many hours I put into 007 and Perfect Dark…  You know how sometimes people can accomplish amazing things by pouring all their energy into just one thing?  Honing their skills and using their time and efforts to create something truly remarkable.  For instance out in Colorado, there’s a stone castle built by one man… all by himself.  An entire castle!  While not nearly as meaningful, tangible, or remarkable… GoldenEye and Mario Kart… that’s my castle. 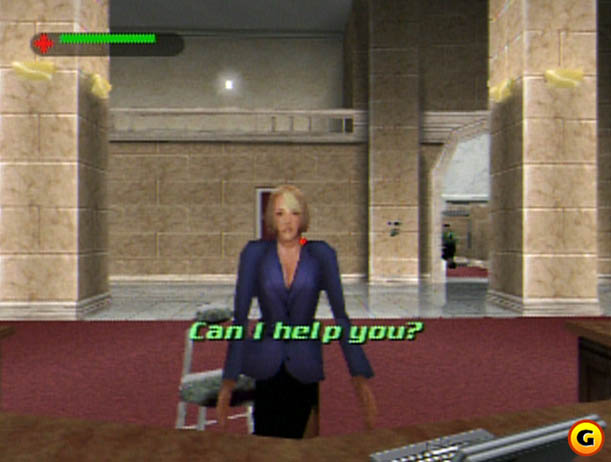 So I may not be the most objective person to ever review this game.  Be that as it may, I believe the game did have some shortcomings other than just not being GoldenEye.  One thing the game touted at its release was the starring role of Pierce Brosnan, not only in likeness, but also using his voice.  However if there’s one thing that I’ve learned replaying these games its that heavy use waveform audio on the N64 is almost universally a bad idea.  With possibly the only exception being StarFox 64.  You have to realize that the largest N64 cartridge available was only 64MB.  TWINE was shipped on a 32MB cartridge.  For comparison sake, 32MB = about 3 minutes of CD quality audio.  And that’s if audio is the ONLY data on the cartridge.  But you have to have all of the maps, textures, animations, physics engines, graphic engines, lighting effects, game menus, etc all on that 32 MB cartridge too.  The result is HIGHLY compressed audio.  What is left is very fuzzy and flat sounding.

“That was Robert King.  We go way back”

“Wonder why he is involved?”

I suppose I don’t have to say that in retrospect, this game could have been a lot more immersive had the characters used on screen text only and skipped voice over audio all together.

As cheesey as the cutscenes are forced to be, the game itself, honestly isn’t that bad.  Again the game follows the story very strictly, and does a good job of recreating the scenes from the movie and taking control of 007.  Infact as I was playing this game, I found myself compelled to go back and watch the movie! 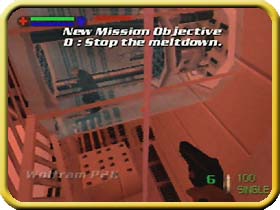 Honestly, this wasn’t a bad game.  The limitations the game had technically, were also the same limitations every other game had at the time.  The controls are solid, and I just wish I had a little more customization over them so I could get them set to my familiar settings.  Levels are fairly linear, but well laid out and plenty of objectives.  And the graphics, are really this game’s strongsuit.  Other than the resolution limitations of the N64, this is really a pretty good looking game!

For me though… this will always be a filler game.  A game in between the great games to pass the time until the next one is released.  And I just can’t find a whole lot of reason now to play this when I could be playing GoldenEye or Perfect Dark instead.