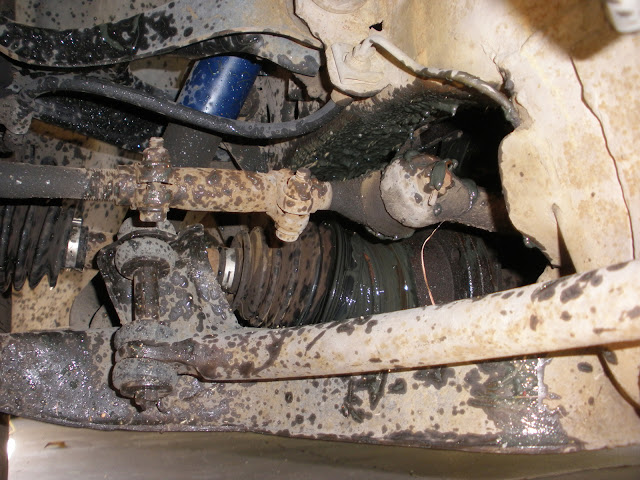 My car has only left me stranded once before in the 6+ years I’ve owned it.  And that was due to my own stupidity flooding the engine.

This time around the failure was more… catastrophic.

As you can see in the picture above, something “exploded”.  That something was the inside joint on my passenger side axle.  I had a mild vibration over the past couple months, and I couldn’t track it down.  So I just kept driving it.  Today on the way home from town, the vibration quickly started to escalate.  I slowed down to 50, and the vibration went away, but then started to come back.  I slowed down to 40… got better…. then came back.  I found a place to pull over and did a walk around on the car.  That’s when I discovered the mess.  The car still moved under its own power so I figured I would try to limp home.

I was about 10 miles from home and figured I’d give it a shot.  Thank God I decided to take the back roads home.  So I head down the county black top doing 25mph.  Everything seems like it was going pretty good.  Until I got to a decent sized hill.  Then POP!  WHZZZZ!  And that was it.  No more go.

So I got off the road as best I could with no power.  I pulled out my cell phone and of course “Your battery has less than 10% remaining, please plug in your charger.”  Nice.  I called my neighbor Chris with my final minutes of battery life and he brought out a truck to pull me home.

So the Toronado is now back in the driveway.  I ordered a new axle.  If there’s anything frustrating about this it’s that the part that broke is a part I replaced only two years ago.  With a 30 year old car that has over 260,000 miles, you figure its going to be one of the 30 year old parts that breaks… not a two year old part with maybe 20,000 miles.  But nothing you can do about it now.  The replacement part is only $70, so still not quite justified to get a new car yet.

At least I made it to the liquor store… I was out of beer.