← My collection isn’t that bad…
Jeep gets new exhaust →

There’s a lot of automobile top ten lists out there.  But there’s not too many lists featuring vehicles as mundane as this.

This list is certainly my own, biased by the vehicles I have personally been exposed to and the era I grew up in.  I think there’s only two cars on the list that are even still being manufactured.

Your list is probably very different, so if you have a “normal” car that is in YOUR top 10.  Post it up in the comments below!

10. Chevy Caprice/Ford Crown Victoria:  These cars had to make the list.  Watch any movie from 1980 to 1995 and I GUARANTEE you will see a Caprice or Crown Vic in some form.  It is mind boggling how many of these cars were built, and they were solid to boot!  They were more than just cop cars or taxi’s too.  Grandma and Grandpa drove Crown Victorias for as long as I can remember.  They’re some of the most spacious and comfortable cars to ride and drive that I know of.  Oh, my first car was a 1979 Caprice too.  “The Beast”.

9. Dodge Caravan:  Now you’re thinking.  “Damn, this is going to be one lame list.” But you need to pack that crap up right here and right now.  The Dodge Caravan was AMAZING.  UN-FING BELIEVABLE.  If you grew up in the 90’s or had kids in the 90’s.  I guarandamntee you at least rode in a mini-van.  I’d venture to guess that your family even owned one.  We had a Chevy Astro, ourselves.  And if it weren’t for the Dodge Caravan… there would be no minivan.  You know how people feel about mini-vans NOW.  Well when the Dodge Caravan came out.  All of a sudden everyone felt EXACTLY THE SAME about station wagons.  The Caravan kicked off 2 decades of the active family lifestyle all by its damn self.  Show some g-d respect.

8. Lincoln Mark VII:  Nothing says “Word, bro” like a 5.0 Mustang.  How many times has some 19 year old jack-ass pulled up next to you at a stop light thinking they’re hot stuff in their primered up GT and gone screaming off thinking there cool?  You know what’s ACTUALLY cool?  Having a little class.  Knowing that you could mash the pedal on that same 5.0 HO motor if you needed to, but you just aren’t in that much of a hurry.  Cocktails aren’t until 7PM.  Besides, the longer it takes you to get there, the longer you get to enjoy those leather seats, wrapped steering wheel, six way power seats and a little bit of elegance that goes with driving a Lincoln.  And then if some punk in a Camaro wants to show you what’s up, it’s on.

7. Ford LTD II:  The LTD II makes this list for two reasons.  A) It is quintessential late 70’s design with the stacked headlights, hood ornament, and big bumpers.  and B) I LOVE big cars.  And they don’t get much bigger than this.  There’s more metal in the hood of that car that there is in most cars today… total.  There’s just something about a big car that says, “I’m more important than one parking space”.  More than that, I think the people that drove these cars knew what it meant to go somewhere.  The automobile shouldn’t be some utilitarian machine that mind numbingly transports you from point A to point B.  If you want that, get a Toyota.  But a car like this has all the things you love about getting home after a long day and leaning back in your favorite chair.  And why should that be anchored to your home?  Kick back.  Relax.  Stretch your feet out.  You’re on a mother f’n boat.

6. 70’s & 80’s Chevy Pickups:  Back when trucks were used for things like: Working.  And before trucks were used for things like: Driving to work.  There is a difference.  The Chevy truck specifically makes the list because it’s so damn good looking.  Chevy kept the same body style for almost two decades and for good reason.  There’s lots of these old rusty trucks around, but when you see one that is original, clean and taken care of, you just have to say, “That’s a damn nice truck”.  That is if they haven’t primered it up and painted it with some kind of glittery boat paint.

5. Chrysler 300:  Okay, so this one almost feels like it doesn’t fit here, right?  85 Chevy, 78 Ford… 2004 Chrysler 300?  What’s up with that.  Well, here it is.  Click THIS LINK, THIS LINK, THIS LINK, or THIS LINK.  From about 1993 to 2005 I think just about every friggin’ car looked almost exactly the same.  And that being remarkably similar to a suppository.  When the new Chrysler 300 came out, I thought, “FINALLY!  Something that has some STYLE, some LINES!”  People always talk about how back in the 50’s and 60’s they made cars that were truly art.  I dare somebody to tell me the 1997 Monte Carlo is a piece of art.  But once the 300 came out and was SUCCESSFUL… all of a sudden you saw other vehicle manufactures start taking some bold strokes of their own.  Finally we’re starting to see new cars again that actually have a statement to make!

4. Vista Cruiser:  I don’t care what you say. Station wagons are sweet.  Much like the mini-van the bad wrap they get isn’t from their own dysfunction, but rather the dysfunction that took place from within.  When you get your family cooped up inside ANY finite space, there’s bound to be weeping and gnashing of teeth.  Don’t take that out on the station wagon though.  And if you’re going to get a wagon, at the top of the heap is the Vista Cruiser.  The class of an Oldsmobile, the freedom of looking up at the stars as you roll down the road to Lord know where dad is taking you next.  Plus put some sweet chrome wheels and a throaty exhaust on, and you have one car I’d be proud to be picked up from school in.

3. Jeep Wagoneer:  I really came close to putting the Grand Cherokee on this list because I truly love it so far, but I couldn’t do it because I just haven’t got to know it yet.  Not that I know the Wagoneer any better, but from what I can tell, this Jeep wants nothing to do with stoplights.  Or even pavement for that matter.  A friend of mine, their family had a Grand Wagoneer as I was growing up, and I just remember being very fond of that vehicle.  Maybe it was the wood grain, or maybe it’s because they seemed a little out of place compared to everything else at the end of their run.  But whatever it was, it always felt like its own idea.  Not playing off of the flavor of the year.  It was about getting away from everything.  And that’s an idea I can rally around.  Hook up an Airstream to the bumper, and you’ve found my paradise. 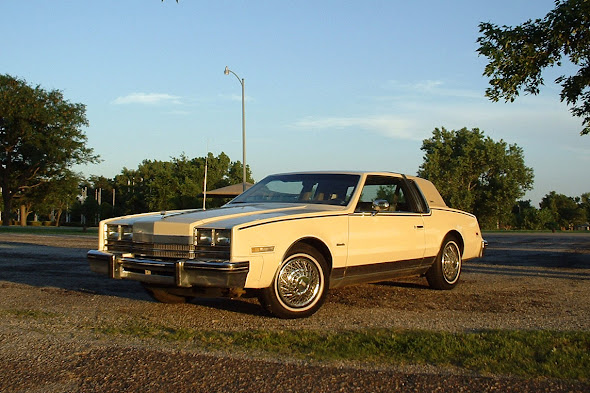 2. Oldsmobile Toronado:  This blog has talked more about the Toronado than probably any other, and I could probably lament even further.  But I’ll just sum it up by saying, “Best car I’ve ever owned, by far.” 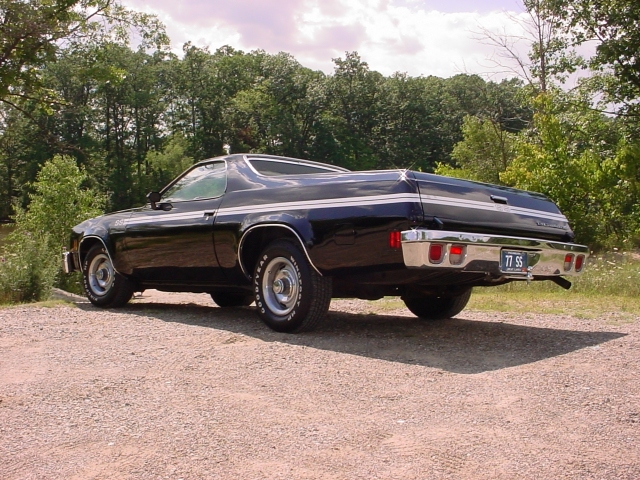 1. Chevy El Camino:  Save your trailer park jokes, alright?  Because some day your sorry butt is going to want to move a couch.  And its going to cost you a 12-Pack.  Because the El Camino doesn’t work for free.  If any vehicle was my Holy Grail, it’s the El Camino.  I had one, and it met an un-timely demise.  Some day… some day… I will ride again.  And have the ability to haul home countless antique radios, engine blocks, and untold other monstrosities that are outcasts from an earlier time… just like the El Camino.

← My collection isn’t that bad…
Jeep gets new exhaust →