A Great Day For U 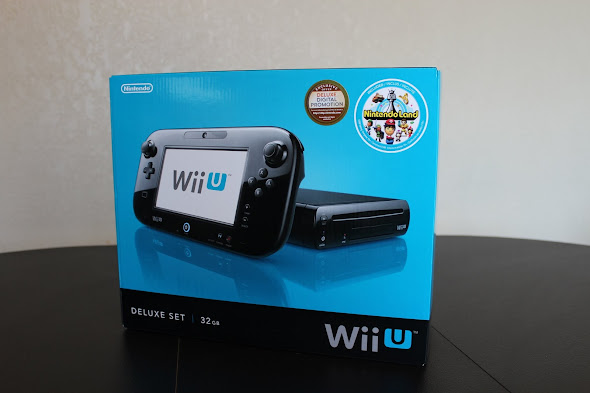 We got our Wii U yesterday.  I haven’t spent a TON of time with it yet, but so far it’s pretty sweet.

Luke and I got to Gamestop at about 11:00am, and it turns out they said we were the first person to come pick theirs up!  At first I thought, “Well that’s lame, when I was younger, I would have been waiting at the door for the store to open!”  But then he said that Wal-Mart got a ton of them and decided to do a midnite launch, so a bunch of Gamestop people cancelled their pre-order and went to get it at Wal-Mart at midnight.  That made me feel better.  There’s still some gaming and Nintendo fanaticism left in the world. 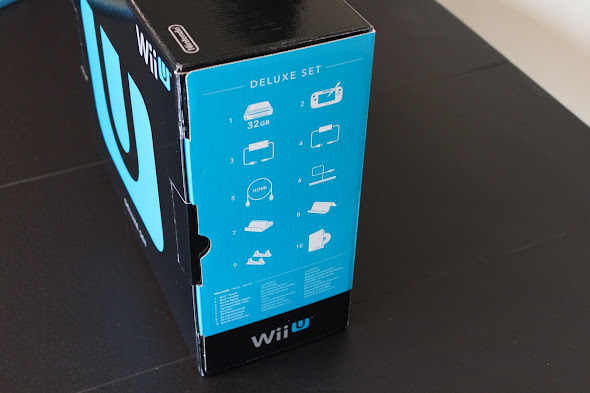 We decided to go with the “Deluxe” package.  It comes with some extra stuff like stands, a charging dock, and the game Nintendoland.  Along with (I think) double the internal storage space of the basic bundle.  So for the extra $50 it’s certainly worth it over the life of the console.  Which is pretty much forever I guess, seeing as how my original NES is still in working order.  Nintendo makes some quality stuff! 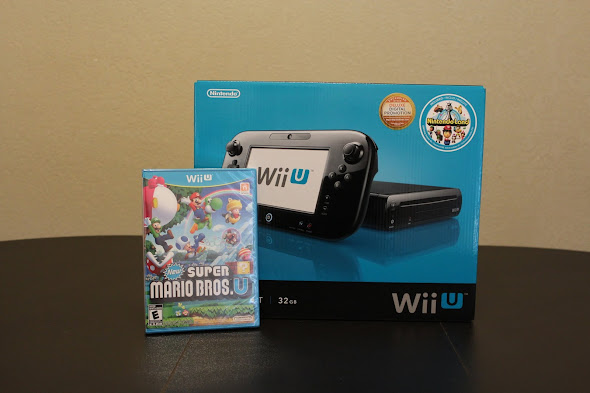 I asked Andrea before she left for Wichita this weekend, “Do you want me to wait until you get home to open it?”  She said “Yes.”  And it’s a good thing I asked, or else I would have just tore into this bad boy!  But as I’ve written before, and as lame as it sounds, opening the package on this kind of stuff is a big deal for a geek like me!  And actually it kinda made me happy that I’m married to somebody who thinks its kinda a big deal too.  I mean she did want me to wait, right?

When she got home Luke had just woke up, and it didn’t take long for us to pop it open.  Everything was perfectly wrapped.  I didn’t document any of it… if you want to see what’s inside, just go to Youtube and search for “Wii U unboxing” and pick from any of the 2300 results. 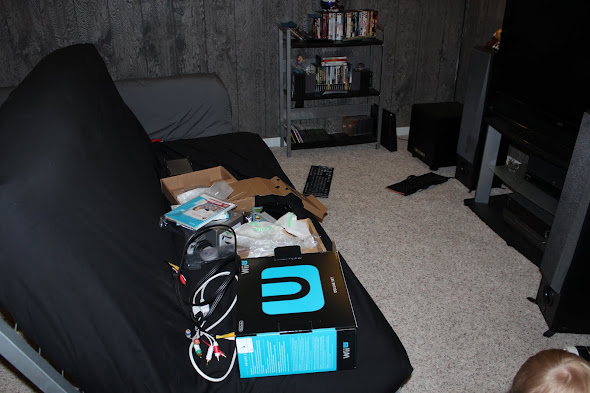 It didn’t take long for the contents to get strewn all over the basement.  We had to move things around.  Unhook old stuff, hook up new stuff.

The keyboards on the floor were Luke’s doing, haha. 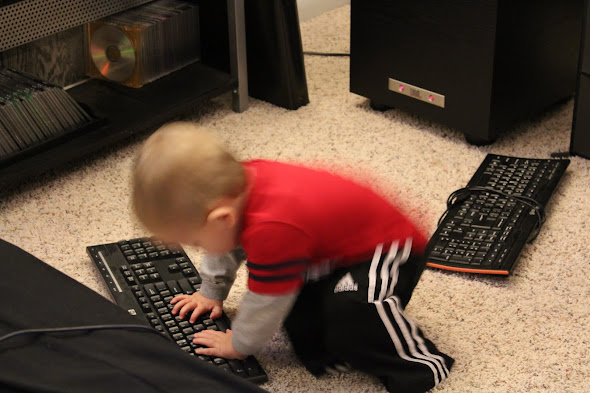 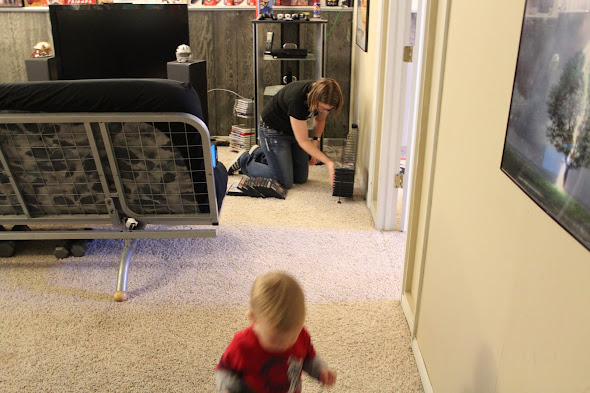 We decided to move the Wii to make room for the Wii U.  Since the U will play all the Wii games anyway.  The Wii console will now be queued for installation into my current backburner project, the “retro” room.  More on that in a later post though. 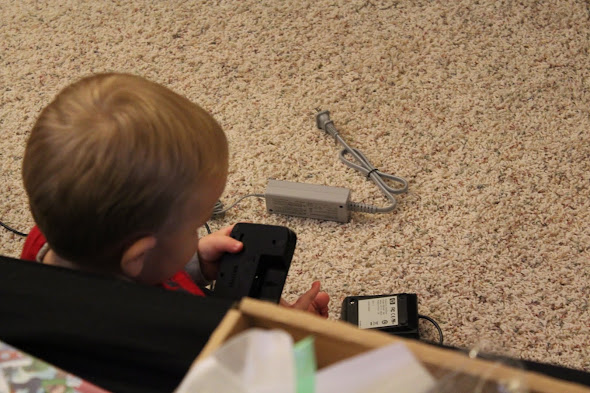 Luke was trying to be helpful.  Or… just trying to figure out what all these new thingys do. 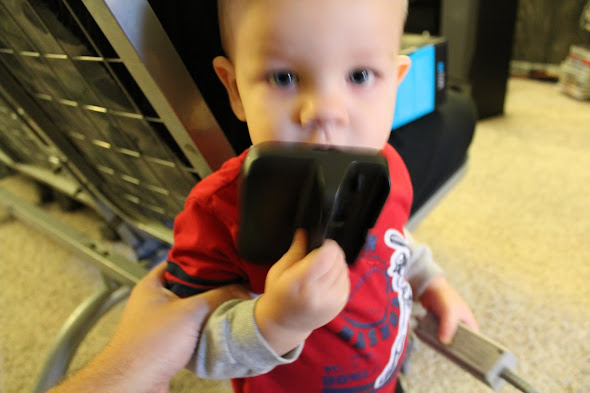 There’s Luke with the gamepad dock…. in his mouth. 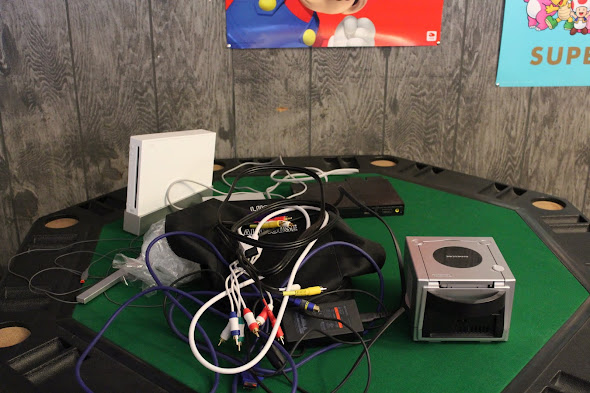 Here’s that queue I was talking about for the Retro Room. Years of fun on this table!

So we got it all set up, and after about a 90 minute wait for the System Update… we FINALLY got to play!  Boy, I don’t know how excited kids on Christmas morning are going to be able to handle that brutal system update… It was about to drive me nuts!  But alas, we are up and running!  I’ll do some more gameplay impressions soon!  For now, I gotta get to work! 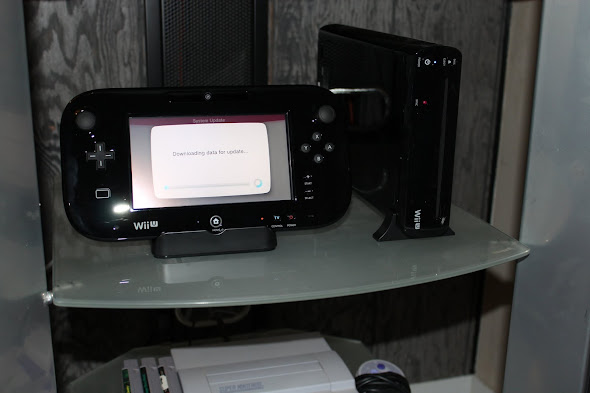