← Watch Luke learn a skill he will never have to use.
Look at this crap. →

If there’s one thing about collecting game stuff that I really enjoy, it’s the controllers.  They are such an intimate piece of hardware.  It’s what establishes the link between you and the world inside the game.  A bad game is a bad game.  But a bad controller can ruin even a great game.

Admittedly, I haven’t experienced EVERY controller.  But I think I’ve spent a fair amount of time with the mainstream ones that I feel confident enough to put together a Top Ten list that no one will agree with.

10. PlayStation: I’m going to lump all the PlayStation controllers into one. And had the original PS1 controller never evolved, it might have actually ended up higher on this list. But I have one major gripe with the Dual Shock X controller… and that is the analog stick placement. When they originally debuted the analog (after someone else paved the way…) it felt super pasted on. But the d-pad, button layout and overall comfort of the controller is outstanding.

9. Arcade Joystick/Buttons: I love the old arcades. The control panels were not only built to withstand daily abuse and grind, but were also purpose designed for the games themselves. I still remember the button layouts on some of my favorite old arcade games. Everything on a good arcade machine feels solid and provides great feedback as you play.

8. Nintendo Entertainment System: This isn’t necessarily a list of the most influential controllers, but not including this controller on the list would feel certainly wrong. Today the NES controller feels really small to me. When I hold the controller it’s obvious that my hands have grown since I first used it. And it serves to remind me of the youth I can never truly return to. Be that as it may… it’s still a brutally efficient design. And the fact that it still works almost 30 years later after countless hours of use proves it LITERALLY stands the test of time.

7. Super Nintendo: I remember when the SNES first came out and my first thought of the system was, “Look at all the buttons on that controller. How do you remember what each button does!?” But once you play Super Mario World, you realize how perfect it is. The way one set of action buttons is concave and one is convex, the excellent D-pad, and the rarely used, but perfectly positioned shoulder buttons… there’s absolutely nothing about this controller I would change. It’s the ultimate 2-D controller in my opinion.

6. Wii U Gamepad: I haven’t spent nearly as much time with this controller as the others for obvious reasons. But from the time I spent with it, I’m blown away. It’s lighter and more comfortable than it looks. It’s solid and it is connected wirelessly to the console from my couch AND my toilet. It has a built in universal remote. I could go on. Nintendo has always pushed controllers where they’ve never gone before, and they’ve done it again with the Wii U.

5. Gamecube: The Gamecube was probably my most anticipated console of all time. And when the local store in Manhattan finally got a Gamecube kiosk setup and I laid hands on the Gamecube controller for the first time, all of the things I had imagined about it were finally realized. To this day, the GCN controller is the most comfortable controller I’ve ever held. The handles are perfectly molded. It just feels like an extension of yourself. And best of all, the analog stick was infinitely improved over the N64 stick which has the lifespan of a gnat.

4. Wii: For a second I thought to myself, why am I putting the Wiimote so high on the list?  Yes it does some things no other controller does, and it did enable an entirely new way to play.  But so many of those games were just waggling the controller around in lieu of pressing a button.  Then I remembered “Skyward Sword”.  The latest Zelda game used the Wiimote to its fullest potential and with great finesse.  In the right hands, the Wiimote can do great things, kinda like the Master Sword I guess.  Any shortcomings in Wii controls are no fault of its controller.  Sadly many developers just never took the time to get it right.

3. Xbox 360: Starting with the Controller S on the original Xbox, somebody finally nailed the design of the perfect layout.  Left analog and action buttons sit squarely and naturally under your thumbs.  D-pad and right analog are only millimeters away.  Trigger fire buttons underneath perfect for shooters and easy to reach shoulder buttons.  Everything was finally where it needed to be, comfortable and solid.  And possibly best of all, a matte finish in a world where every other single piece of electronics is a glossy, fingerprint smudged mess.  I’m one of the few that actually enjoyed the original Xbox controller bohemouth, but I have to admit future iterations again, starting with the Controller S are far more refined.

2. Mouse & Keyboard:  There’s a few genres out there that are only optimally experienced with a keyboard and mouse.  FPS, strategy, and simulation games to name a few.  While it’s been done, I can’t imagine playing many of those games with a controller without feeling like I’m making a serious compromise.  I’m not a huge PC gamer, but I’ve played a few great games long enough to appreciate the level of control and customize-ability the platform offers.  Being able to swap action keys around.  Fine tune sensitivity  and having multiple commands at your fingertips.  After a while your brain forgets about the controls and you just play the game.  Which is what any great controller should do. 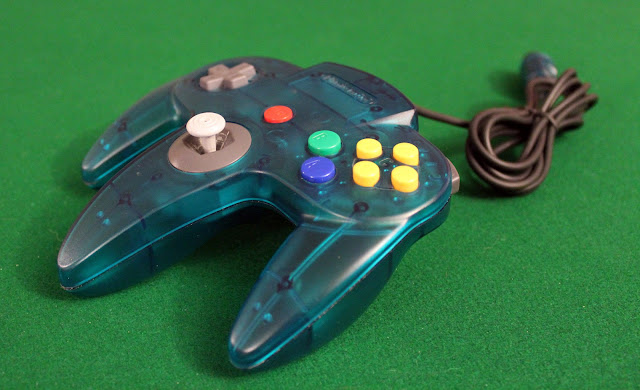 1. Nintendo 64:  Okay… no big surprise here if you’ve followed the blog for any length of time.  I am and forever will be hopelessly infatuated with the N64 controller.  Objectively… should it be number 1?  Definitely not.  That joystick gets destroyed under moderate use in just a few months.  But let me tell you, when it’s new and working like intended, it’s silky smooth, and the sensitivity is incredible.  You can simply apply pressure, and not even actually move the control stick itself, and it will cause Mario to creep along ever so slowly.  The button layout is perfect.  Two main action buttons, and the yellow C buttons that, while designed for camera control in games like Super Mario 64, are also perfect for shooters and strafing like in GoldenEye, or simply additional action buttons like in Zelda: Ocarina of Time.  The trigger underneath was always satisfying for firing whatever weapon you happened to be wielding  and the shoulder buttons are large and responsive.  I don’t care if its less than perfect, this is my list, and if you ask me, the N64 controller is the most awesome controller of all time.

← Watch Luke learn a skill he will never have to use.
Look at this crap. →