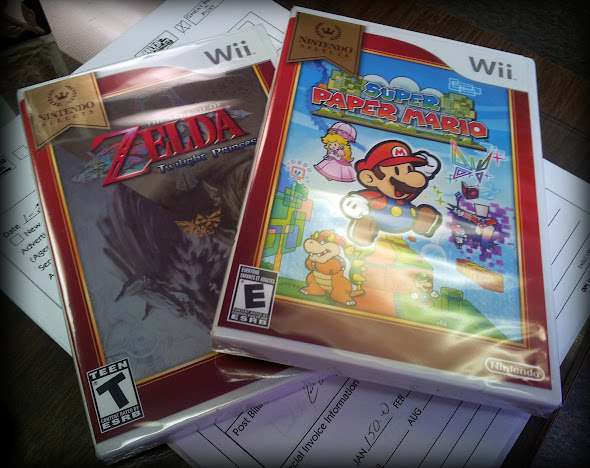 This past weekend we wrapped up the last of the family Christmases.  I was generously given some Best Buy gift cards from my Grandma and Aunt & Uncle.  Thank you!

In the past this would have been a bit challenging, since the closest Best Buy is 2 hours away.  But thanks to their website and free shipping I scored these awesome deals!

These are two amazing games that I’d had to pass on when they came out but now are on the “Nintendo Selects” line which is Nintendo’s “Greatest Hits” pretty much.  Each of these games was only $20!  Brand new!  I love it!  And there’s a ton of content.  Hell, at the rate I’m going it will only take about a year for me to get through these.  Actually, that’s a pretty good entertainment value if these last that long.

I’ve made some progress on the retro room.  Got the NES hooked up in there finally.  Gave the console a thorough cleaning which it probably hasn’t ever got more than a dusting in the 25 years it has existed.  So I played a bit of Dr. Mario last night before I headed to bed.  Also downloaded Balloon Fight on the Wii U Virtual Console for 30 cents.  Andrea and I had a blast playing that for probably an hour!  Unfortunately outside of that I haven’t had much time to play games.  Hopefully with these two epic additions, that changes soon.