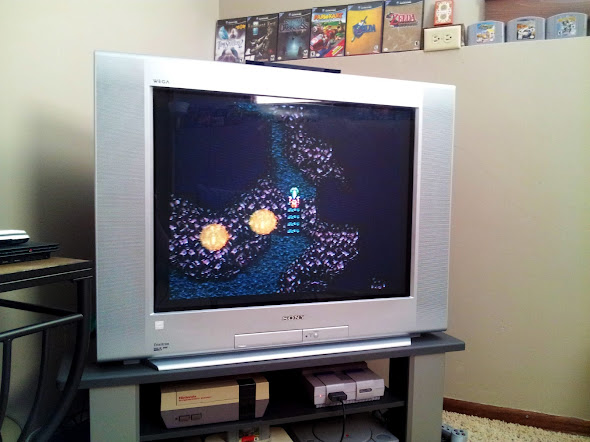 Decided that it was a day for some retro fun.  I picked up Final Fantasy III off eBay a while back.  Weeks ago actually.  I just today finally got around to beginning a file.

So far I’m about two hours in and I have to say I’m enjoying it thoroughly.  Even in 2013 this game is compelling.  I can see how in the early 90’s this game would have been epic.  Not that it isn’t epic now, but it’s not really fair to compare this game’s presentation with something from today’s hardware with HD, surround sound, and fully orchestrated soundtracks.

It hasn’t been too difficult, but I have to confess, I really didn’t understand how to use save points AT ALL for a long time.  I thought just walking over the save point activated it… nope not so much.  A fact I only found out after I got my but kicked in the Vargas fight.  It was pretty obvious to me I was supposed to use Sabin’s “Blitz” command, but I failed to notice any explanation on how to use it!  I kept getting “Invalid Blitz Input”.  I died… then found out all those save points I thought I saved at… didn’t.  But after some brief frustration and going all the way back to the first arrival at Figaro Castle… I regrouped myself.

After an event like that, most games I put away and think, I’ll come back to it when I’m not so pissed (Metroid Prime).  But this time, I was so thoroughly enjoying  the game, that I really wanted to get back where I was, and see where it was going.  It took me about 45 minutes to get back to the Vargas fight (ACTUALLY saving frequently along the way this time).  And I made it a point to pay close attention to where it explains how to use that Blitz command.  Only it DOESN’T!  I can only assume in the instruction booklet it explains how to “Blitz”, because no where in the game did it even hint at what to do.  And as far as I can tell, that’s the only way to win that fight.  I had to seek the guidance of the internets to figure out what I was supposed to do there.

You know, there was a time when all you had was an instruction booklet and maybe a friend that had played the game before you to help when you got stuck like that.  You might be able to go buy a magazine with some hints in it at the store, but that would require your mom taking you there, and you know darn well, Mom wasn’t going to take you to the store solely to buy a magazine for a video game you were stuck on.  So you had to REMEMBER you wanted that magazine the next time you happened to be there.  And even then, you were lucky if begging her to buy it worked.  So thanks for the Internet, I guess.

I think for the rest of tonight, I’m going to play some Guild Wars 2 before it’s back to the weekly grind of work and my 1.5 hours of free time each night.  Man, being a grown up is grueling sometimes.  Remind me to write that blog about how I vowed to make gaming a priority for life back when I was 15.