My Philosophy on Collecting

I appreciate the most extreme collectors on a preservation level.  I respect the people that try to collect games and systems that are complete with all the boxes and materials that would have been included when new.  Without their eccentric obsession, knowing exactly what documentation came with the original Atari 2600, for example, would be impossible now.  99% of people will say, “Who cares?” but if you want to know what something was like “when it was new” as opposed to “when it was garage saled”, then keeping this stuff intact is the only way.  It’s the nuances of history, but it is history none-the-less.

I’m not sure when I began considering myself a “collector” of video game junk.  For the most part, my stuff is just amassed through purchases over the years and I’ve never gotten rid of it.  The only game I’ve ever gotten rid of purposely, was Yoshi’s Story for the N64.  But for the most part gaming has just been a past-time I have enjoyed and blown my disposable income on.  Over the years I have ended up with quite a bit of stuff.  To me it just shows that I’m old. 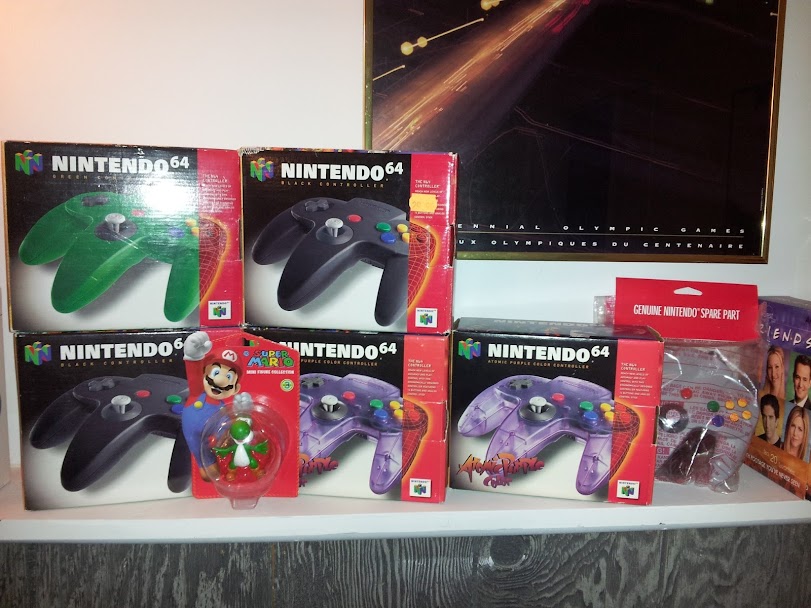 But I guess I crossed over the line to collector when I started hoarding all these brand new Nintendo 64 controllers.  Since I bought them they have done nothing but sit in their boxes on my shelf, never being played with.  Dissatisfied with third party N64 controllers, my original plan was to use them as my current wore out.  Most of them I acquired for around $30 which is about what they costed back when they were on the market anyway, so using them wouldn’t feel that bad.  But it’s like that nice bottle of wine.  The one that you’re saving for some really special occasion, and every special occasion that comes along, just doesn’t feel quite special enough… so that super special bottle never even gets drank.  That’s when I realized what I was.

So all of a sudden, my 25 years of video game purchases are now a “collection” so I’ve labeled it.  Now I feel like I have to establish some guide lines.  Mostly to set some limits for myself.  Because when you are a “collector” that just means the amount of money you can spend on old junk instantly loses all reason.  If you’ve got the cash to blow, you can buy a certified, sealed copy of “Pinball” for the NES for $19,999.99.  That’s only $19,999.00 more than I paid for my loose cartridge of the same game a year ago. 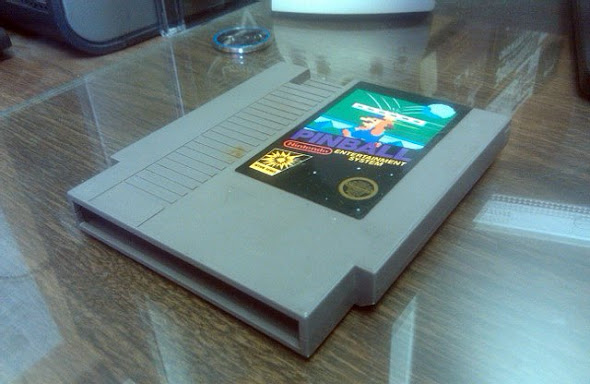 So what’s the difference between the two?  Well, there’s only one difference that matters.  You can ACTUALLY PLAY one of them.  Don’t get me wrong, I appreciate the $20k version for what it is.  A pure un-altered time warp.  Maybe the only one left in the world.  Sealed behind a plastic enclosure that just as well be a temporal barrier that is impossible to traverse.  And if only two people decide they want it… then it has value.  But one thing is for sure.  If you want to play the game you definitely don’t want that one.  And when it gets right down to it, I’m all about playing my games.

So whatever it is that I happen across, whether its the Vectrex, NES Pinball, or the Wii U, I want to make sure it’s something that I feel like I or anyone that comes over, can pickup and play.  So it should work reasonably well, but not be so pristine that actually using it destroys what it is.  To me the nostalgia of this stuff comes from playing it, not looking at it.

I like to make sure things are as original as possible.  I never got into emulators, because there were always little differences that took away from the experience.  Don’t get me wrong, you could go to great lengths and get very close to the original experience.  But nothing replaces blowing in a cartridge, sliding it into an NES and hearing that springy click as you push the cart down into the system.  The feeling of the original controller in your hand and knowing you don’t have the ability to quick save at any moment.  For me it’s all about being able to shut everything else out, and fore that brief moment, you might be able to convince yourself that it is 1987 again.

That’s where the worth in my collection comes from if you ask me.  Not in its monetary value.  But it’s ability to transport you to another time.  To actually pass through that temporal wormhole and at least let a part of you exist in that world that used to be.  When you’re playing an old game, you remember how simple life used to be.

I really enjoyed growing up, and I have vowed as I get older, to not forget what it was like to be a kid.  Now that I have a little guy of my own it feels important to me that he is able to do the same thing.  I don’t expect him to care about the same things I care about.  I want him to make his own memories.  But I do hope he learns to value his experiences the same way I do.  You can easily get caught up in the desire for more “stuff”.  But in the end, it’s only the experiences that really matter.

So maybe I should finally open up the box on one of those N64 controllers and lay down some blistering Mario Kart 64 times.

I’ll think about it.