Truthful Quote of the Day

If this  were made today you would earn experience points, level up and then get some kind of cheat after a couple tries to help you through the level… because everyone is entitled to win!  Well, not back then.  These games made you cry.

The above is a quote from Mark Bussler’s “Classic Game Room” in his review for Teenage Mutant Ninja Turtles II for GameBoy.

Games have come a long way.  20 years ago we were mesmerized by a few dozen textureless polygons in barren and featureless worlds.  We could have epic 2D adventures unfold on a canvas only 256 pixels wide.  Just like your grandparents lived without now expected amenities like air conditioning or cruise control, we played on without quick saves or wiki’s.  We didn’t long for them, because we didn’t know any better.

Technology has enabled games to be some of the most amazing pieces of entertainment production available.  Massive open worlds to explore, epic and cinematic story presentations, new ways of interfacing with that world and controlling your character that wouldn’t have been possible in the 70’s, 80’s or 90’s. But strip away the technology, and what you expect out of a gameplay experience is fundamentally different than it was 20 years ago.

Let’s consider  metagaming.  Metagaming, in this context being what players in general expect from a video game, along with what developers produce to meet those expectations and sell games.  You couldn’t release a game such as Teenage Mutant Ninja Turtles II above on any current generation hardware and expect it to be even mildly well received.  It’s clunky, it’s slow, it’s repetitive, and it has a steep difficulty curve.  Consumers expect polished and expansive games with tons of content.  Many games don’t even include instruction manuals anymore.  No big deal, because the first 2 hours of gameplay are tutorials.  The game IS the instruction manual.  Without any research whatsoever, I feel pretty confident generalizing that the average gamer today has a shorter attention span than they used to.  Maybe that’s just something old farts like me say.  But I’ll even include myself in that generalization.  There are so many more mediums of entertainment and information now battling for our attention, that I don’t think it’s a far fetched claim to make.

Please don’t take this the wrong way.  I’m not saying “New School” is wrong, “Old School” is the only right way.  I just think that as the “meta” morphs the game experience slowly and over time, that eventually you reach a moment where you suddenly become aware and have to say to yourself, “How the hell did we get here?”  Where your computer controlled side kicks can kill every enemy in a level, where you can sit idle and let your health re-gen, where you can insta-save at any moment so there’s no fear of dying, or perhaps most egregious, purchase in game “power” with real world money to make a game easier. 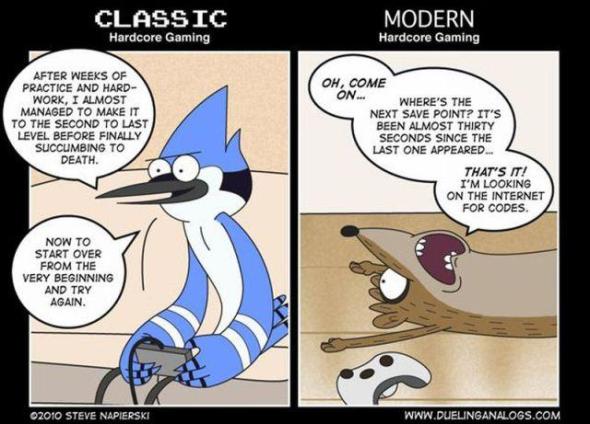 As a developer, your job is to create games that will sell.  When games first became a profitable venture, it was the job of the developer to come up with a fun and compelling hook, then beat the ever loving shit out of you in short order.  In the arcades, this kept people pumping quarters into the machines.  Games that were intensely fun to get you playing, but quickly became incredibly hard to get you off the machine.  The first home consoles basically fulfilled gamers’ desires to bring that arcade experience into their home.  So again, developers gave gamers what they wanted.  As home consoles became more prevalent,  the market started to open up for games that were a more lengthy experience.  You could easily sit on your couch for 30 minutes or an hour and enjoy a video game now.  And again, with an installed hardware base already in place and the technological means to deliver those longer games; people first started to demand them, and soon expected them.

Over time, along with the technology, gamer’s expectations also evolve.  What is first innovative, soon becomes standard.  And once it is standard you become comfortable, even rely on it.  Jump back in the evolution chain and it can be difficult to adapt to a game that doesn’t have some of the expected features of a more modern title.  I experienced this with Final Fantasy III on the SNES.  I was trying to figure out how to use Sabin’s “Blitz” command, and was completely lost.  I didn’t have the instruction manual and there was no in-game tutorial.  I was completely adrift for a while.  I guess part of me just expected the game to hold my hand through that part, instead it opted to mercilessly kick my ass.

For me, some of the best games I’ve ever played are the ones that frustrated the ever loving crap out of me.  Because you keep tyring, and when you FINALLY beat it, you feel like you have really accomplished something.  I remember the first time I beat Ganon, got past Bald Bull, de-fused all the underwater bombs in time, and passed Stop N Go Station.  All some of the hardest and most rewarding experiences at the time.

This isn’t a rant about how games aren’t hard any more.  There are still hard games.  This is about lowering the bar until the player can step over, rather than expect the player test their mettle. Regardless of a game’s difficulty there’s something I respect about a game that is unwavering in its challenge.  I feel there’s some degree of measurable respect to be given to players who meet those challenges.

Games now aren’t worse for their crutches.  Just a different kind of adventure.  One that is perhaps a little more scripted and forgiving.  But if you get a chance, pick up an old game.  Grab your old Super C cart and see just how far you can get your first time through.  It can be a humbling experience.  And in the “say anything” age of the internet, it is my observation that we could all use all the humbling we can get. Myself included.