A new generation, and rebuilding of the Retro Room.

My little brother Jake came up this past weekend.  For the past two weeks, he’s been calling me every couple of days asking about GoldenEye.  What we can do, what levels we can play, and most importantly, what cheats we can use.  Haha.  I don’t think he typically plays a lot of games, but for whatever reason he’s really latched on to GoldenEye.  In fact, I haven’t seen anyone this excited about GoldenEye since… me.

So we spent a large amount of time playing that.  I was content to spectate.  As I’ve said before, I almost like watching people play games, more than actually playing them.  Which is why I still nag Andrea once in a while to play through Final Fantasy X.  It’s just so fun watching people discover the game as they play.  It’s as close as I can get to playing it again for the first time.

More than anything, I found it remarkable that an 8 year old kid in 2013 is at all interested in a game that is literally twice as old as he is.  Compared to games today GoldenEye must some mundane to some extent.  But I appreciated and enjoyed our shared enthusiasm.

If you’ll notice the TV on the floor in the picture above.  Luke has since moved into the old Retro Room.  So we moved that TV upstairs.  It is a heavy bastard.  Much more than one person can handle alone.  So in a time crunch, I had to set everything up like that, because I knew I’d be at work, and Jake would NOT want to wait until I got home to play GoldenEye.

Later this weekend, Andrea was able to help me get the TV up on the stand, and I started rebuilding the Retro Room. 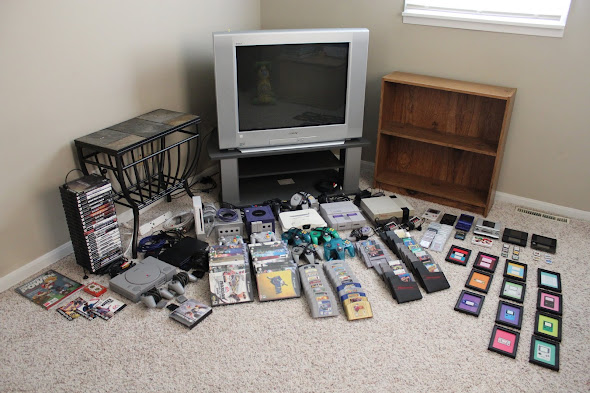 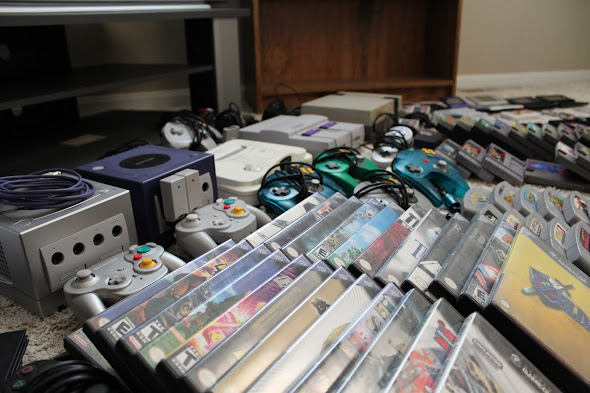 Seems like a nice spread to me.  =)  One thing to note, is that little of that has been actual collecting, for collecting’s sake.  A vast majority is just accumulation over time.  Most people garage sale old games and systems once they are bored with them, I just never did and now I have a ton of this stuff.  This is all pretty much everything before HD consoles.  The only things missing are the Wii games which we still keep downstairs to play on the Wii U, and the ridiculous amount of controllers.  Everything else from 1987 – 2012 is pretty much right here.  Kinda weird to see all that history and all the memories in one place.

I like this arrangement better than what I had in the old room.  Rather than a straight line from left to right.  Looks pretty good I think for some free cards from Club Nintendo, and $1 frames from Dollar Tree.

You can’t be around all these classic games and NOT pick one up!  Andrea found Super Mario Land 2 and decided to give it a go.

And there’s pretty much the current setup.  I like it better than the previous arrangement.  I still have to swap some cables out to get some of the systems playable, but for the most part, it’s all within 60 seconds of being ready to play.  I have an idea for controller storage I’m excited to try and I want to try to find a few more things for the walls.  But the Retro Room is back!  That’s the important thing.