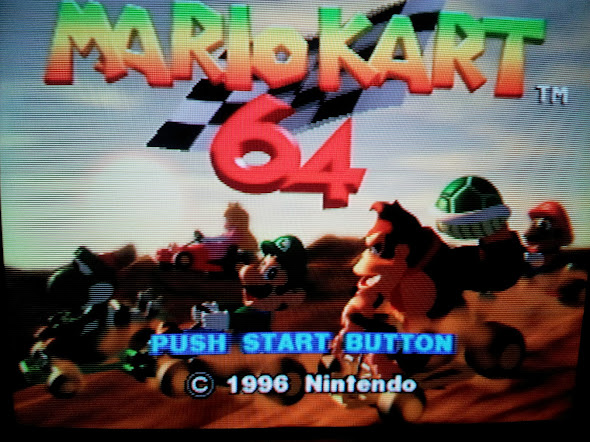 Tonight was Retro Night.  I really was at odds as to what to play.  What I NEED to play is Final Fantasy VI… but I wasn’t up for something that required such focus and investment.  To be honest, I really contemplated just sitting at my PC and watching all of the fantastically hilarious “Geek Week” content on YouTube.  But I said to my self, you have begun this tradition of Retro Night, and you MUST honor it.  I thought and thought.  Then I decided, you know, if it came down to any game you could play at this moment… of all time… what would it be?  And from there the choice was simple.

Andrea and Luke are out of town.  Some men might use this as an opportunity to go out on the town, hang out with the guys, smoke some cigars.  Me?  I decided to play Mario Kart 64.  And drink.  Infact I was doing equally as well at both.  Well, by the end I was doing much better at drinking than I was at Mario Kart.  Still got gold on all four cups in 150cc though.  Not really saying much though.  I’ve played so much of this game, I could play it even practically unconscious. 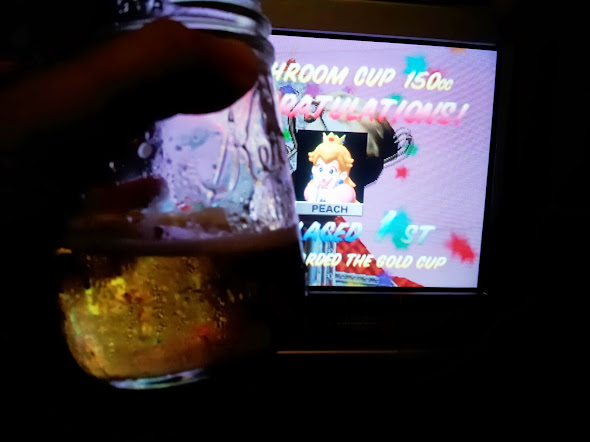 I would like to think that being slightly inebriated helps me experience these old games at a point in time before I had mastered them.  That is severely not the case.  It serves only to frustrate me as I know what these hands are capable of, only what I see happening on the screen isn’t matching what I’m telling them to do.  Slamming into walls, running into traps… not my usual style; not my style at least not when it comes to this game.  We go way back. 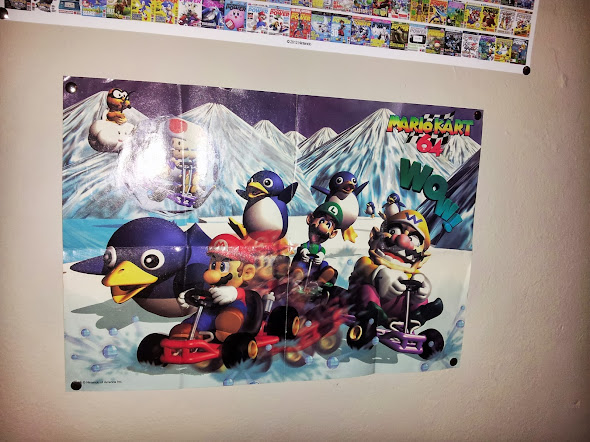 I tweeted a picture of the poster above a few days ago.  I’ve been tweaking out the Retro Room recently and knew I had this stashed somewhere, but it hasn’t been displayed in probably almost 10 years.  It was originally a poster insert in the Tips & Tricks magazine that I used to get back in the 90’s.  The magazine always published the fastest times for Mario Raceway, and I always would practice and beat the published time before the next issue came out.  Of course, then there would be a new FASTER time that some other reader had submitted.

At any rate, this poster appeared in one of the issues.  On the flipside, it has a similar scene for Kalamari Desert (wish I would have photographed that before hanging it).  Hopelessly lost in my Nintendo 64 addiction, I pinned this up in my room at the height my my Mario Kart 64 obsession.  Over the years I let go of some of the more minute parts of my collection, game boxes and the like.  But I could never bring myself to throw this one away.  It’s an emotional anchor back to a really different, but very pleasant, time in my life.  Sentamentally, I value it almost as much as the Mario Kart 64 cartridge itself.

It was a fun night.  Though I couldn’t help but think of all the fun we had with Biebs, Bef, Bobby and the rest of my family playing battle mode on Block Fort or Double Deck.  An experience that sadly I don’t think I’ll ever be able to re-live quite the same way.