← Busy But Productive
Time… It Flies. → 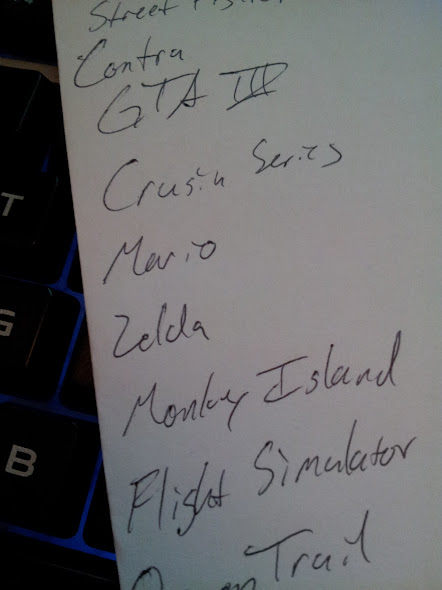 This will begin a difficult series of posts.  It’s the beginning of another fall sports season and there are a lot of teams out there making cuts.  They’re whittling their best players down to the best of the best.

Well when it comes to games, there are literally hundreds of phenomenal games out there that deserve to be played and re-played.  But if you had to cut it all down to a starting lineup, who would make the cut?

I’m going to go through my games in my collection and decide, if I had to leave it all behind and pick one game to represent each genre, one game that I could play over and over in that category, what would it be?  So I’m going to have to make some tough choices to determine my all time favorite game in each of the following genres:

Did I leave out any important categories?  Let me know in the comments.

I’m going to have to leave some really great games on the shelf.  And just to warn you in some of the categories like Fighting, there WILL be some great games left out of discussion entirely because those are genres I just never quite got into and as such some iconic games I simply never have played. They will still be represented though.

Then my ultimate goal is once this list is completed, to PLAY these games, capture the video, produce it out and make a show out of it.  This will become my project for Friday night’s “Project Night”.  None of that can commence though until “The List” is finalized.

So check back soon as I make the final cut for my defacto “Sports Game”!

Posted on September 3, 2013, in Projects, Video Games. Bookmark the permalink. Leave a comment.

← Busy But Productive
Time… It Flies. →