← The List: One Racing Game
A Day For the Toronado → 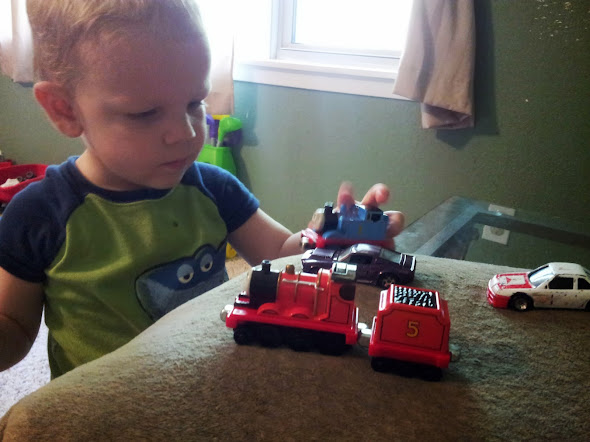 This is where Luke and I spent most of the weekend.

Here I am, sitting on my bum, like I have spent most of the weekend.  I haven’t left the house for almost 48 hours now and it feels glorious.

Without a doubt the majority of my time has been spent hanging out with Luke.  He truly loves to play.  From the moment he wakes up, until he is reluctantly put to bed, playing is serious business.

In all honestly, it’s really fun for me too.  Deep down I’ve never really grown up.  But now, as a dad, it’s socially acceptable for me to play with Hot Wheels, make tracks for the trains, race cars with Luke, watch cartoons and do all the stuff a kid wants to do.  We spent probably an hour this morning, eating breakfast and watching Super Mario Bros. cartoons from the 90’s.  Then we played cars on Luke’s rug with all the streets on it.  Took the putt putt golf set and pretended we were playing hockey.  Sang songs in the bathtub.  Made a mess with a deck of cards.  Had a pillow fight.  Watched a full season of Video Game High School.  And had a tickle fight.  All just this weekend.

So no, I don’t really feel guilty at all about not getting anything done.  What I did get done feels pretty rewarding.

← The List: One Racing Game
A Day For the Toronado →