In contrast to the previous post, this genre is going to be a lot harder to choose a winner.  I’ve been playing racing games since RC Pro-Am and Rad Racer on the NES.  I’ve played a lot of fantastic ones over the years too. And to think that I could only take one is actually quite bothersome.  That means no matter what I’m going to have to leave some significant portion of my past behind me, never to be experienced again.

I think my appreciation for racing games goes back to a kid and just loving to play with cars like Hot Wheels or RC cars.  Video games are just an extension of that.  I’ve had so many and played so many over the years, even just narrowing it down to this list is going to be difficult.

There’s probably several games on that list that wouldn’t make most people’s.  That’s probably because there was really no reasoning behind how I acquired a lot of these games.  This was the days before the internet for the most part and I didn’t have access to in-depth reviews and pre-release coverage.  But in retrospect, I’m glad because I might have missed out on what are now some of my favorite games.

Take Crusi’n USA for instance.  This game got almost universally terrible reviews.  But it makes my list of top racing games.  And it’s all because I have just had a ton of fun with the game.  Playing against Dad, or even just unlocking the new cars.  I had a lot of FUN and that’s what gaming should always be about.

Micro Machines on the NES was a super fun game.  But man was it hard.  It ends up that you just have to resolve yourself to memorize each track.  But it’s fast paced, and you really feel like you’re driving the tiny cars.

Top Gear Rally is another game that most people probably remember as “Just another racing game”.  But at the time, this game had so much going for it.  It was technically well made with all sorts of eye candy and the cool ability to design your own decals.  But I always felt it was a very balanced game, and one I STILL pick up and play on occasion today.  The music is fantastic as well.  Just a couple notes and I can vividly remember late Friday nights and Saturday mornings racing these tracks still long after the rest of my family went to bed.

RC Pro-AM.  This game has a special place in my heart.  I’m not sure when we got it.  It just seems like it’s always been there.  If you were to pick a Fun Melon and squeeze it dry, what collected would be RC Pro-AM.  It’s demanding, it’s simple, and even if you get really far and lose, you still have just as much fun starting over as you did on level 26, which I think is the farthest I ever made it in that game.

Gran Turismo 3 is the sole reason I bought a PS2.  I remember I bought the red box pack-in that came out right after my birthday.  The extra birthday money I received helped offset the hefty $329 price tag.  But it was worth it.  I poured hours into this game.  It’s one of those that you can get down to the real nitty gritty of your car and tweak absolutely everything.  You can purpose build a car for all out speed, or something for the road courses, the circle track, there was just so much to do and so many details.  It’s my go to “serious” race game.

World Driver Championship is one of the best driving games of all time.   It didn’t have licensed cars, you couldn’t design your own decals, but on the N64 there isn’t a better looking racing game, and may not even be a better looking game period on the system.  It still looks halfway decent today, which is more than can be said for most every N64 title.  But even a great looking game can be ruined by mediocre gameplay.  But WDC doesn’t let up there.  The tracks are fantastic.  Changes in elevation, the number of tracks, and then each track has around three or four variants that keep it interesting.  The controls are balanced, the cars are fun to drive.  If you like driving games, and haven’t played this, it’s worth getting an N64 just to play it.

But there’s one racing series that, for me, stands apart from all others.  Even when I went to write this I thought to myself, “I know I need to put a list together, but it’s just not fair to all these other great games that they have to compete with… Mario Kart.”

I’ll start with the newest Mario Kart, Mario Kart 7.  I wasn’t expecting much from this game.  I had almost felt after Mario Kart Wii that the series had finally run its course.  But Mario Kart 7 rekindled that flame of what a great MK game really is all about.  Fun, quick to learn, difficult to master and great tracks.  I found myself enjoying it MUCH more than I anticipated.  And racing online is a total blast, but I’m not too sure they’ll be Wi-Fi on this island I’ll be stranded on.  I guess there’s no guarantee there’ll be electricity either so this list is kinda nuts anyway…

Mario Kart: Super Circuit is one of those few games that I truly treasure.  It’s a game that I deeply invested time and energy into.  I feel like I have a greater amount of ownership over that game than the average person.  Back in the 00’s, I was a regular of the IGN Boards.  When Super Circuit came out, a few of the members decided to start a Time Trials competition.  I spent hours working on times, and then hours more posting and talking about them.  Infact the only real reason I ever bought a digital camera was to post my Super Circuit times on IGN.  Those are happy memories.  But there is no other game I’m more invested in than the next one. 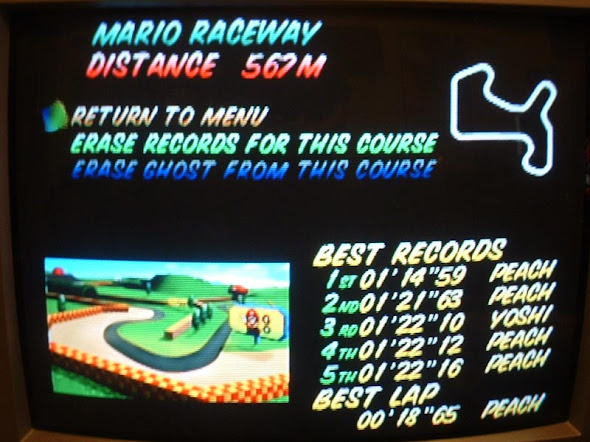 I was and still am a Time Trials freak.  I know my times aren’t world records or anything, but the represent a lot, to me at least.  Is this is?  Is this my favorite game of all time?  I don’t know… maybe.  It is certainly something special though.  And it’s one thing that I couldn’t imagine leaving behind if I had the choice.

Check back soon, and I’ll be trying to figure out which Puzzle Game makes The List!

Posted on September 15, 2013, in Video Games. Bookmark the permalink. Leave a comment.