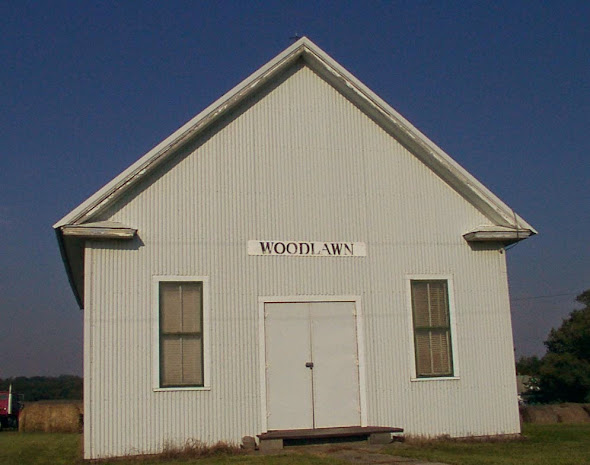 As I try to refocus on the blog now, one of the things I hope to do is write a lot of things down before I forget them entirely.  I hope to do some more “nostalgiariffic” posts mostly about growing up and the places and things we would do.  These won’t nesiccarily be in any particular order or anything, just whatever perks to the top.

Somebody earlier this week was asking me where all I had lived.  And the first place would have been Woodlawn, KS.  Just a little blip on the map with a population literally in the single digits.  When I was born, the population of the town literally increased over 10%.  We lived there until shortly after my sister was born when I was 3.

Some of my Woodlawn stories I’ve already shared before on the blog in other posts, but it’s all worth sharing again.  To me anyway.

To describe our home, it was a fairly nondescript small white house.  We had a front porch with steps that lead down to a sidewalk that proceeded two thirds of the way to a dirt road that crossed in front of the house.  To the east was the Woodlawn Baptist Church.  And to the west a small garage.  Inside the front door you had the entry into the living room.  Wood paneling if I remember… that part is rather fuzzy as I didn’t give much thought to interior decorating when I was 3!  But what house in the 80’s DIDN’T have wood paneling!?  Past the living room was a dining area separated by walls with ledges cut into them that would play a significant role in a story later on.  Further still, through the next door was the kitchen.  Take a left from there you were in my parents bedroom (I think) or maybe separated by a back porch area between the bedroom and kitchen.  Keep going through the bedroom and you find the bathroom with one of those porcelain tubs with the feet on them.  Then if you walk through the bathroom you reached the second bedroom where I stayed.

I don’t really remember a lot about the bedrooms.  But I do remember you could run all the way around in one direction in circles through the house.  We had a little plastic three wheeler and we would shove the long attachment from the vacuum through the bottom of it and I would set my feet on it and mom or dad would push me around the house.

We had a cat that I mostly remember for climbing the screen on the front door.  “Bridges”… or “Bridget”… I think was her name.  And we sorta had a dog.  His name was Jack, and I say “sorta” because he was Dad’s dog, but when Dad brought him to our house, he would always run back to Grandma & Grandpa’s house a few miles down the road.  Or maybe that’s just what Mom & Dad told me, haha.    Jack only had 3 legs after he got one got stuck in a trap.  I always remember him as a three legged dog, but I can’t remember for sure if he had already lost his leg at the time we lived in Woodlawn or if that came after.

I was very young when we lived there, so I don’t remember a lot. And what I do remember is quite fuzzy.  But here’s a few things I recall about living in Woodlawn.

I remember thunderstorms.  Maybe it was just one storm that my memories have edited to make it seem like very storm.  But it seemed like any time there was lightning, there was always a bolt or two that would strike the house, or very near the house.  I remember it feeling very scary.  I also remember blaming the house for attracting those bolts.  Haha.

I remember playing with a plastic yellow Corevette.  It was a large car for a toy and of course one of the most fun things about playing with cars is CRASHING cars.  Well for whatever reason, I decided one day that this car was too durable.  So I started jumping on it and breaking it.  Pretty much demolished the thing.  I remember Mom or Dad asking me why I broke my car.  And at the time I didn’t really know.  That’s just what I had decided to do and didn’t have much of a reason.  I try to remember with Luke that sometimes when kids do things that don’t make any sense… they don’t really have a reason why they did it.

I remember an old mechanical hand pump water spigot out in the yard.

I remember jumping into beanbags.  Those ledges I mentioned earlier?  They were perfect for climbing on and tossing yourself down into beanbags below.  Of course this meant lots of burst holes in the beanbags and one almost cracked open skull as once I jumped trying to get some major air, and went headfirst into the ledge above.  I don’t remember much immediately after that, but I remember not jumping into the beanbags much after that.

I remember a figure 8 slotcar track that Dad put together for me.  He mounted it to a large piece of wood so you didn’t have to take it apart and put it back together all the time.  You just lean it up against a wall and when you’re ready to play with it again, take it down.

I remember the pokieness of real Christmas trees and keeping them watered.  I also got a Hot Wheels toy for Christmas one year that you race the cars across a bridge and use a little TNT lever to blow up the bridge as the cars go across.

I remember riding on Dad’s orange motorcycle up and down the dirt road in front of our house.

I remember Jamie coming home from the hospital.  I didn’t get to see her much in the hospital, but I was excited to have a sister!  I remember when she first came home and my parents laid her in a playpen out in the living room.  I remember just looking at her, seeing this brand new person.  I was happy and excited that I would have a new friend.

And I vaguely remember getting ready to move to Dodge City.  I don’t remember packing anything, but I remember Mom and Dad talking about it before we went.  Telling me what was going to happen.  I’m sure they had no idea how I was going to handle it.  I remember it being exciting though.  I was anxious to see a new place and new things.  Live in a new house.  All that leading up to our extended stay in the Lora Locke Hotel.  But that story will have to wait for my Memories of Dodge City post.

Posted on July 30, 2014, in Nostalgiariffic. Bookmark the permalink. Leave a comment.