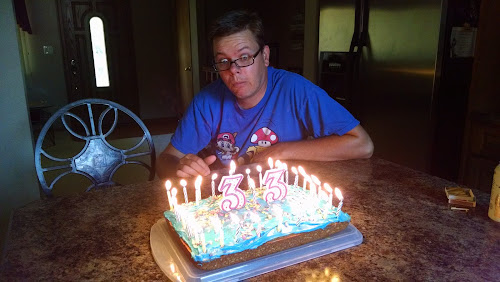 Well, yesterday was a great birthday.  At least as far as grown up birthdays go.  I had a regular old day at work.  But when I got home, Andrea and Luke made me a cake completely full of candles!  There was a lot of heat coming off that baby!

They also got me some pretty cool presents.  Luke got me an old… well it was new… the concept is old to me… video chair for the game room.  I haven’t sat in one of those since we had the ones back in Ingalls.  I seem to rock back much easier in this chair.  I think I just happen to be a bit more top heavy these days. 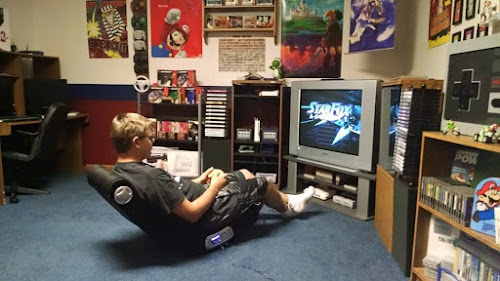 Andrea picked up an old Gamecube game for me, “Star Fox: Assault”.  I’d heard mixed reviews about this game, but I wanted to pick it up someday anyway and decide for myself.  Honestly, I don’t know what people are complaining about.  A lot of folks didn’t like the ground missions, but for me even those were still really fun.  I haven’t gotten anywhere close to beating the game yet, but the short time I’ve spent with it has been time well spent.

I also played a little Mario Kart 64 last night.  Got really close to a new best time ever on Luigi’s Raceway.  After all this time I’ve been trying some new strategies and taking new shortcuts.  But it’s always very satisfying when I land a time on the leaderboard.  We do a little Time Trial competition at the Nintendo 64 Forever Forum.  It’s fun to compete with some of the other members there and it keeps me motivated to continue to play and improve my times. 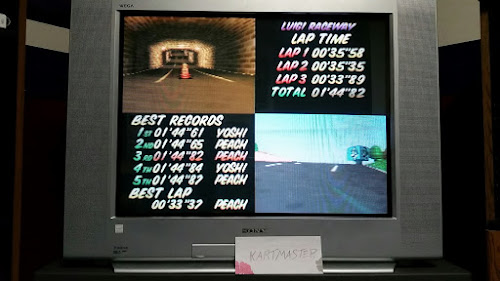 Tonight it’s more organizing around the house.  We finished painting the basement yesterday, so just a little touch up here and there where the tape pulled the paint off the wall…. and then start hanging up all the decorations.  I’m looking forward to making the room a fun space to hang out when people are over.

I guess at this point, birthdays really are just another day.  I remember when I was a kid, I NEVER thought that would happen.  Sure maybe other people.  But ME?  I’m going to have a big old party every year.  At that skating rink!  That actually still sounds like a lot of fun.

I haven’t forgotten about the blog.  In fact I often think about it… and a wave of guilt rushes over me.  Much like the time I was playing Animal Crossing on the Gamecube.  The Mayor was going on vacation for a week and asked me to turn the lighthouse on each night.  Naturally I forgot.  Not just one night… but every night.  It was truly months before I went back to the game mostly because of the shame and scorn I was surly to receive.  This is pretty much the same.

So I’m back.  So much has changed since last time.  There are so many moments that have passed by undocumented.  In the past I’ve blamed Twitter for being too easy to blast out photos and stories.  But I haven’t even been using Twitter that much lately either.  What’s changed?  That’s something I can’t quite put my finger on.

About the time of my previous post we were just getting serious about house hunting.  An experience I truly regret not chronicling.  It truly felt like some sort of Space Mountain type ride.  Where you’re strapped in, on rails you go through all these different twists and turns, never quite sure where you are, or what is really happening.  And then you’re pooped out at the end the same as everyone else.  With a house and a bunch of debt, and if someone asked you to explain in detail exactly how you got from the start to the finish, you’d be hard pressed to do so.

I really like the house we ended up with though.  We looked at quite a few houses.  Some nicer than others.  Some much crappier than others.  But this had almost everything we wanted.  All the big stuff for sure.  It’s much nicer than anything I ever expected to have or even deserve.  It’s been updated around the turn of the century.  It’s plenty big for the three of us.  And it has a great big shop to not only park the cars in but have room to work without moving everything around.  Just the fact that we don’t have to start up a car to play basketball in the driveway is an upgrade!

In all honesty though I was quite happy with the house we were renting before.  I had a garage I could work on the cars, a nice big back yard for get togethers and Luke to play in.  Great neighbors.  Lots of room.  It was still nicer than I ever thought I deserved.  The last couple weeks there I was really thinking about how great of a place it was for us, and how I really would miss it.  After we moved all of our stuff out and I was there doing the final scrub down I went through the house for the final time.  I went room to room and just stopped and reflected on all the great memories there.

Downstairs in the computer room where Andrea and I spent a lot of time there were some great memories playing Guild Wars 2.  Late night gaming sessions playing Rise of Nations, and many many posts on my new favorite forum N64Forever.com.  But it was also a place where Luke spent a ton of time playing.  He bounced in there as an infant.  We stacked blocks and tossed foam bricks at each other.  He had his first laugh in that room.  And possibly became the only 1 year old in the last 20 years to figure out how to use a Floppy Diskette!

The Family Room downstairs was host to some epic poker games.  Most that ended early in the morning hours with a questionable All-In bet because we were all tired and ready to sleep.  Friends and family crashed out on the futon.  Screams of laughter filled the room playing games like Wii Party U or Nintendoland.  It was a great room to show off what Andrea and I were both passionate about with all her 49ers stuff and the KSU, Bond and Friends posters that graced the walls.

The small bedroom down there was Luke’s first bedroom by himself.  Previously the Retro Room we cleared it out and set Luke up in there.  He took to it almost immediately.  First in his crib, then in his Lightning McQueen bed.  I remember he was so excited to put it together that in the midst of “helping” he almost lost several of the screws and fasteners that would hold it together.  It’s where he’d get dressed to face the day each morning, always bright and smiling.  And of course it was also the place where the water would leak and soak the carpet every time there was a heavy rain.  Not everything was perfect about that house.

After discovering the leak, we moved Luke to the room across the house in the basement.  It had just been a guest room up to this point.  But we moved all his stuff over there and I made sure to keep Luke involved in every part of the process.  Where he wanted his bed.  Where his stickers and posters would go.  Once again, he had very little problem switching rooms.  For the first couple nights he wanted to go back to the “old room” but after that, he had totally bought in!  I told so many bedtime stories in this room.  My bedtime stories are usually real stories about things I did, or things he remembers.  Whether it’s about Mom building the solar system model that hangs in his room, the snowflakes we cut out of paper, launching rockets when I was a kid, or the story of the Black Car; I always let Luke pick the story.  And whatever he picked I told it to the best of my ability and tried to keep them consistent when he chose the same story over and over.

Even the bathroom downstairs was an emotional goodbye.  Luke would brush his teeth every night as I sang him his ABC’s.  It’s such a strange thing to get sad about, but the thought that my little guy and I would never be in that room sitting on top of the dryer brushing teeth and getting ready for bed honestly moved me to tears.  As I turned off the light for the final time I knew it was a place and time I’d never ever be able to go back to.

Everything upstairs was just as meaningful.  The bedroom where Andrea woke me up in the middle of the night and said it was time to go to the hospital.  We left that night and came back with a bigger family.  It was home to the nursery, the retro room 2.0, and many nights pacing back and forth with a baby in my arms just hoping and waiting for him to fall asleep so I could soon do the same.  I remember after we first moved in, in April, I was so happy because for the first time possibly of my life, I had a bedroom with windows you could actually open.  I loved the feeling of sleeping with the cool breeze blowing in.  Reminded me of camping.  Only on a soft bed.  And an alarm clock to wake me up.

The kitchen was home to some great meals made by Andrea, and as retro and out of date as that kitchen was, I loved it.  For all those reasons!  There was a super cool 70’s square light shade that hung in the middle of the kitchen when we moved in.  I cleaned it all up and it was like brand new.  Until roofers came to re-shingle the roof after a hail storm.  The constant hammering on the roof knocked the light down and it shattered on the floor.  One of history’s greatest losses.  Here Luke also had his 1st Birthday.  I remember he cried when everyone (crammed into the house) laughed when he plopped his face into his the Yoshi Egg cake that Andrea had made for him.

The living room was great.  No TV.  Just the old GE radio.  Some comfy furniture and the fireplace.  The picture window was perfect for setting up the Christmas tree.  Andrea and I would snuggle on the couch enjoying a fire in the fireplace.  Luke always had plenty of toys out and about to play with.  And the time Andrea set his “Christmas Train” up around the tree and he discovered it for the first time was just so magical.

I know things change.  And I know the home we’re in now will create so many great memories just as wonderful, maybe even more so.  But the move to the new place was certainly a bittersweet moment in time.  I wonder how much, if anything Luke will remember of it.  I know I always remember the house on Worden fondly.