← How Did I Get Here?
Aprendiendo Español →

Is it Spring Yet?

So since the last post, we’ve finally found some time to work on the ATVs…. my parents took the kids for a weekend, and Andrea and I did what I’m sure all free parents do, spend some time working in the shop together!  Haha.  At times we even felt a little bit guilty enjoying our temporary “freedom”.

Out of the three ATVs we own, only one ran.  With it being really too cold to ride, winter is supposedly a good time to work on them.  But man is it so hard with young kids.  Luke is getting old enough that he could actually be helpful, but I struggle with getting him interested.  He’s on board for a hot minute, then he’s begging to go do something else.  I don’t want to force the kid.  I mean, heck it might just not be his thing.  But at six years old, do you even have a “thing” yet?  I just don’t want him to end up hating it I guess. 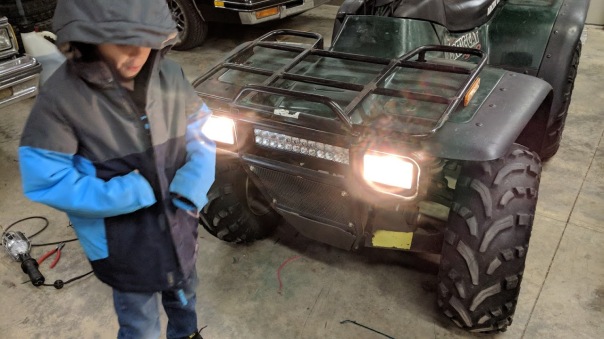 Emma for sure is less than interested unless she can hold it and stick it in her mouth.  That’s probably appropriate though when you’re nine months old.  However with Andrea being full time Mom all day, I like to come home and kinda take over as caretaker at least until the kids go to bed.  Give her a little bit of a breather and some sanity.  So I feel super guilty even when she encourages me to go work on… well anything outside of the house.

After bed times are finally over it’s about 9PM.  I look at the clock, think about some of the other things I want to do, play a game, watch a show, actually have an adult conversation with my wife… then I usually convince myself that there’s not even really enough time to get started on anything, and end up doing mostly nothing.  Then I feel pretty disgusted with myself all around.

So it was nice that Andrea and I both were able to be out there working together.  She was able to change the engine and transmission oil on her Honda.  I finally finished putting back together the engine on the Arctic Cat, and much to my surprise, it actually started and ran!  I think I have a few more adjustments to make on the clutch, but it drives!  We got more done in one day than we have so far all winter!

That’s not to say I don’t love my children, I most definitely do!  I was so happy to see them when they got back.  It’s just that everything takes a lot longer.  It’s hard to look at your list of things and not get discouraged with yourself, or feel “lazy” when in reality, you’ve HAVE been busy, doing OTHER important things.  I keep telling Andrea that there will be a day in the not incredibly distant future where we will wish they were coming to us more, wanting to jabber and jabber for ever, wanting to play with us, and trusting that we can fix all the problems in the world.  The challenge for now is to appreciate it.  And I think probably also later, to not pretend that it was all only beautiful and without its own challenge and sacrifice.

It’s hard, being a parent, finding a balance between your identity and “parent”.  But I think in the words of Jimmy Dugan, “The hard is what makes it great”.

Posted on February 7, 2018, in Family. Bookmark the permalink. Leave a comment.

← How Did I Get Here?
Aprendiendo Español →