My Love Letter to the Switch 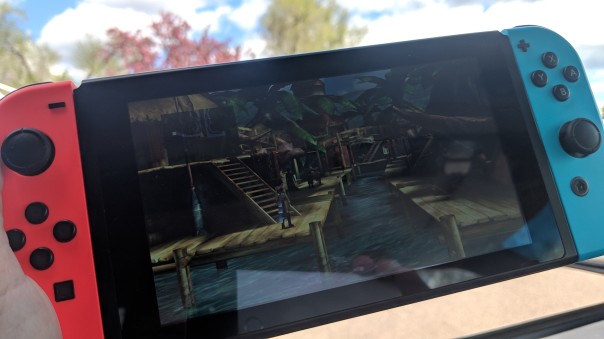 I still remember back to that moment that I got hooked on Nintendo.  I was 6 years old, we were visiting one of my Mom’s friends that lived on Avenue C in Dodge City.  The boy that lived there had an NES in his room, and we were playing Super Mario Bros.  I couldn’t believe there was this whole world to explore inside the TV!

Eventually we got our own NES at home, and I could play whenever I wanted.  Except when I had to go to school, or to the store with Mom, or to Grandma’s house, or any time anyone else wanted to watch anything at all on the TV.  In the 90’s the Gameboy was a thing, but the experiences were always so much more limited that you still kinda wished you were playing NES.  Now, exactly 30 years later, my dream is finally realized.

As I’ve grown up, gaming has waxed and waned as one of my great passions in life.  How I remember being a 15, hopelessly a slave to the N64… Mario Kart 64 Time Trials, GoldenEye Fests, 120 Star runs in Super Mario 64.  Then I said to myself, “No matter what happens, no matter how old I get, gaming will always be important to me.”  It brought me so much joy, it really did, that it was hard to imagine life without it.

That is life though, isn’t it?  Right when you think you can’t be any more happy, or any more miserable for that matter, life shows you a whole new level of it you never thought existed.  The hard part is I think we as humans have a tendency to throw ourselves at whatever the new shiny is.  At times to the extent of saying that nothing that has come before could possibly compare to what we have now.  And by extension, that what we had before must be “crap”.  I don’t know why we do these things.  We get rid of things we treasure because we are convinced that something newer is better, we will mistreat the people we love in order to win the love of new people who are basically strangers.

I don’t think that’s a fair way to treat ourselves.  It’s not fair to look at all of your past choices as mistakes or shortcomings, because of something new that you never saw coming ended up happening.

When I got that NES back in 1988…  It was wonderful.  Beautiful.  And that is an experience that I don’t feel like should be diminished because experiences now are so much richer and complex.  To extrapolate, that the feeling of holding that gold Ocarina of Time cartridge in my hand for the first time isn’t an experience I shouldn’t value, because how could it possibly compare to the birth of my children.

So far the Switch has been becoming this common point that so many of the things that bring me joy intersect on.  It’s a place where I can play 2 player Super Mario Bros. with Lucas.  I can team up with Andrea in Rocket League.  Re-live the cookyness of Final Fantasy X-2.  I can play Ice Hockey with Dad in a hotel room.  I can re-visit old places from Ocarina of Time in Breath of the Wild.

But that’s not the best of what the Switch brings to my life.  Switch makes gaming fit into the nooks and crannies of life.  Switch doesn’t make me choose it as the most important thing.  It’s the master key that magically takes the shape of whatever you need it to be.  If I have 5 minutes before work, an hour over lunch, a 6 hour window on the weekend.  In the living room, in the car, at my desk.  It can find a way to fit, without having to push aside family, responsibility, or any of those other adult realities of life.

This “adult life” though is up to you what you make it.  You could let your responsibilities carry you away without having a choice, or live life completely to your own whims to the detriment of those around you.  Contentment is a bit of a moving target that always exists somewhere between those two extremes.  And I’m thankful that all along that spectrum, the Switch is always available to keep a part of me that brings me joy near.