Careful What You Wish For

At the beginning of this year, I wrote an entry about how I wanted more projects in my life.  How I wanted to create things.  So far, mission accomplished.

We finished our shelves down stairs.  They turned out pretty great I think.  We’ve already run out of room, but I have no regrets, as this was about as big as those shelves could fit in there. 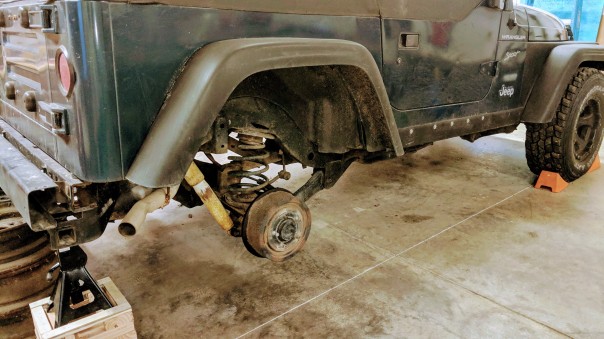 After that I started tearing into the Wrangler, which is still up on jack stands in the garage.  I have the feeling this is either going to end up being an easier… or much harder project than I have anticipated, but since the Wrangler is a bit of a toy, it’s been put on the back burner as we fired up all sorts of other things after it got started.

The biggest one has been the new floor, which has been pretty well documented on my Twitter feed @kartmaster.  I’ve helped putting down flooring like this before.  That snap together stuff.  But I’ve never been the dude in charge before so it was a bit intimidating.  Mostly because if I screw it up we have to live in it and look at it every day.

Sometimes people will say to me things like, “You should do that for other people and make some money.”  Here’s the thing.  This took me like a month… working after work.  Taking a day off when I just didn’t feel like it.  Getting mad.  Nah.  There’s a reason people pay other people to get this done.  And if I were to fall one way or the other from the DIY fulcrum, it would definitely be the customer side.

We also sold the Cutlass and the red Jeep here this year too!  I’ll got into some more detail about the emotions behind all that in another post, but selling things like that is work.  I hate selling stuff, putting up with the people.  Wasting your time on the flakes.  But it’s done and I feel pretty good about how it all ended up.

Selling those led to getting a truck.  I’ve never really needed a truck especially since we got the trailer.  Almost everything we’d need to do could be hauled around there.  But when we started riding ATVs, and as Luke gets older and we’re looking at getting a gas powered one for him, logistically it is going to be a lot easier to put his ATV in the truck, and the other two on the trailer.  Even with his little power wheels one now, loading up is a two person job to get Andrea’s beast turned sideways on the trailer.  So I’m looking forward to spending more time riding, and less time loading!

Of course days after buying the truck I was already diving into a project there.  On the test drive, I knew right away the first thing I would have to fix was going to be the seat.  It would slide around as you were driving like you were sitting on marbles.  It lead to feeling really not in control, haha.  “How hard could it be!?”  Turns out, actually, for once, not that hard.  I cobbled together some scrap pieces from around the shop, built some new bushings, put it all back together and it works great. 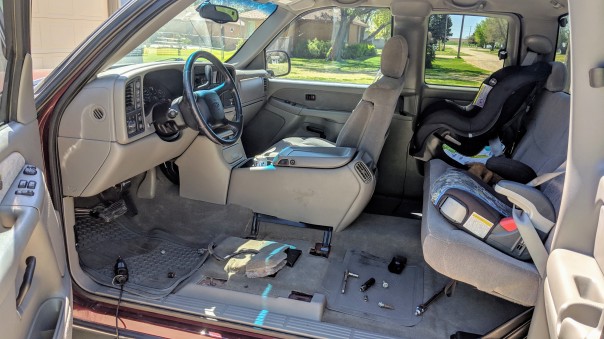 I’m thankful to be able to do these sorts of things.  Thankful for Youtube mostly.  No matter what my problem, I’m NEVER the first person to have it and there’s almost always an ingenious way to fix it that I never would have thought of myself.  I’m thankful to have a wife like Andrea that trusts me to take these things on.  She used to ask me, “Are you sure we can handle something like that?” back in the day when I’d bring up a project.  Now she knows that… it may not go like we planned, but we’ll figure it out.

To be honest though, I’m ready for a break from some projects for a while.  I’m ready to get out and play.  We haven’t been riding at all this year except on the dirt roads around the house.  I have tools and piles of wood, or tires, or supplies everywhere.  I need to return to a normal resting state of existence for a while.  Careful what you wish for I guess.