← No Sense
Getting the Car → 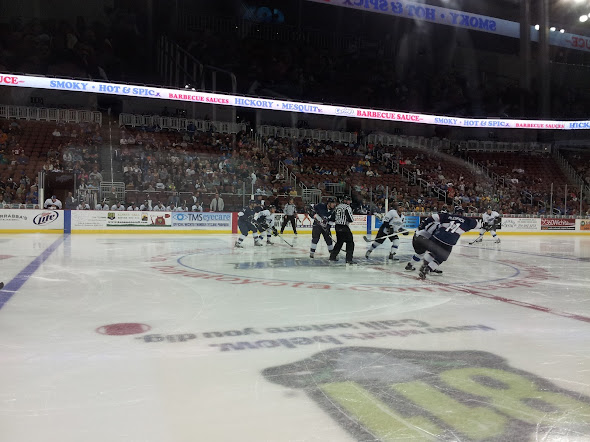 Andrea and I had some fun Saturday night.  She bought two tickets behind the glass at the Wichita Thunder hockey game.  They’re just a minor league team.  Probably minor minor league but it was still fun.  We’ve both been getting into hockey over the last season or so, and she bought these tickets as a surprise.

We’ve been to a couple Thunder games before, and they’ve always been fun.  But we’ve always talked about how it would be exciting to sit up close right behind the glass.  It’s one of those things that is probably kinda like Nascar.  You get up close to some of the action, but the best view is most likely higher up.  There were times at the far end of the ice, it was difficult to see what was going on. 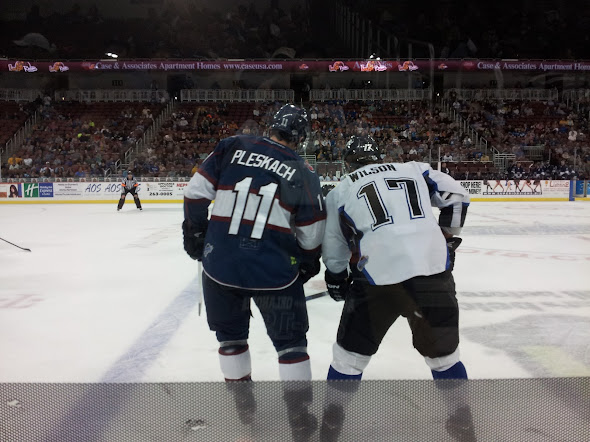 Offside Faceoff right in front of us!

But it was pretty cool being able to feel the puck smacking the wall right in front of us, and seeing the fights right there.  There was one occasion where I went to go grab another beer, and Andrea said a fight started right in front of her.  She said she was on the big screen with her mouth just hanging open as the two dudes were dukeing it out.

The game started out with Wichita getting its butt kicked.  They were down 0-2 at the end of the 1st.  But came back to tie it up with 0.3 seconds left in the 2nd period.  The game ultimately went to overtime and Wichita lost.  Still a good game though.

Luke stayed with Grandma while we went out, but by the time he’s 3 years old or so, I could see him really enjoying a game like this.  He gets excited when we watch hockey at home, and with the mascot there throwing out prizes into the seats and the “Chuck-A-Puck” contest during the 2nd intermission, he’d probably have a blast there.  There were a lot of other kids there and it was just neat to see all of them yelling and having fun.

I could totally see myself getting season tickets to something like this if it were closer.  We had a lot of fun, and had about the best seats you could get and it wasn’t terribly expensive.  I certainly spent more in beer than we spent on the seats.

Posted on November 18, 2013, in Sports, Travel. Bookmark the permalink. Leave a comment.

← No Sense
Getting the Car →